FIVE FEET APART is Hollywood’s latest attempt to extract romance from life-threatening illnesses—this time it’s centered on the disease of Cystic Fibrosis and its effect on youngsters, Haley Lu Richardson’s Stella, a zesty perfectionist, and Cole Sprouse’s Will, a perpetually suave ne’er-do-well. The film takes place primarily in the hospital ward—apt, since everything about the film is heavily sanitized, Clorox-ed, and Windex-ed to within an inch of its life, as the shamelessly-elicited tears, which should flow freely, find themselves hampered by an, even for this genre, uncommon sterility and calculatedness.

We’re introduced to Stella through the now commonplace expositional trope of YouTube vlogs, where she effervescently details her struggles with CF and muses about the potency of human touch. Lu Richardson, one of the very best young actresses working today, brings much warmth and vibrancy to Stella, finding the humanity in her OCD tendencies and making palpable a tragic backstory, despite its narrative contrivance. Unfortunately, Sprouse can’t hold his own—he’s fine when given standard-issue YA cute-icisms but fails spectacularly when forced to emote and be grounded in a scene. 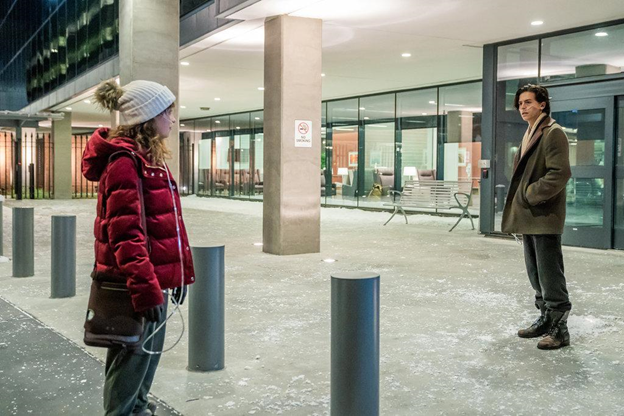 “…Do we have anything else to talk about?”

The title, as endlessly hammered home by the film’s supporting characters, refers to the distance the two CFers must keep between themselves at all times—it’s originally six feet, but Stella decides to “steal” a foot back from the disease, a strange choice that seems to contradict everything the character believes in. So it is indeed bizarre that in many scenes, even before Stella revises it to five, the pair is shown being clearly closer than the rule provides for. What doesn’t help is director Justin Baldoni’s (of JANE THE VIRGIN fame) decision to use long lenses throughout the film to significantly condense the space between the pair, thereby rendering the eponymous dictate essentially moot and negating the reality of the characters. There is never a felt sense of distance or estrangement, which neuters the impact of the couple’s inevitable physical contact.

Perhaps the film’s most egregious creation is that of Poe, a fellow CFer who’s been friends with Stella since childhood. Poe is gay, providing the screenplay with the appearance of something approaching progressivism (though these characters are all presumably well-off and there’s no attempt to broker a conversation about the American healthcare system, the film uncomfortable with its own sense of privilege). Poe’s queerness is seen entirely through Stella’s cishet prism, with Stella chastising the boy for calling off a recent relationship; eventually, he learns that Stella was right all along and thanks her for knocking some sense into him. Of course, before Poe can resume the relationship, something devastating happens, and the question is raised as to why he even exists—seemingly to just rattle off token GBF observational humor until he is no longer needed. 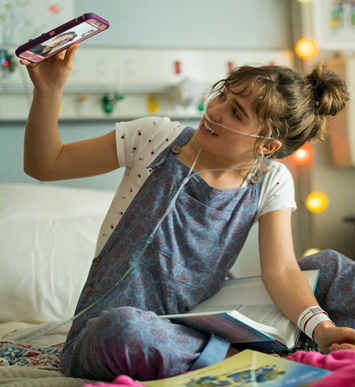 Oh yeah, be warned. There are a LOT of Apple products in this film.

Baldoni occasionally (nearly) reaches authenticity, like in a poolside scene which finds Stella and Will stripping to reveal their myriad scars to each other. Baldoni isn’t sure how to cover or cut this moment, but it’s at least a moment of introspection (of which the film has very few). Most interesting is the implementation of the pool cue, which Stella carries around to measure the five-foot distance, as a phallic substitute, with Will grasping one end and Stella moving the opposite end along her chest. Baldoni, of course, shies away from taking the scene to its logical conclusion, but it’s an instance of him attempting to analyze the sexual dynamic between two people who cannot touch one another.

Once the picture reaches its third act, all bets are off as it scrambles to heap cheap conflict upon cheap conflict, resulting in a truly ridiculous trek on a frozen lake (you can guess where that goes). After the film cuts to black, and the omnipresent alternative soundtrack kicks in, we’re left pondering Baldoni’s intentions—one gets the feeling he doesn’t care one iota for these characters, his camera afraid to get too close lest the audience start to detect the seams of his production, the constant manipulation and acts of emotional extortion to which he is addicted. It will work for its target audience (judging by the gasps in my theater, more than adequately) but for those not in its demographic? Best to keep your distance.

Nanami Ozone Make Their Presence Felt on the Refining NO