Spoilers for PIG ahead, proceed at your own risk.

A man lives in a shack in the woods alone. He owns few possessions besides his prized truffle hunting pig. With his pig, he digs up rare truffles, which he sells to a rare truffle dealer, who in turn sells them to high-end restaurants for astounding profits. The man hurts no one, no one bothers him, seemingly not even the government with their pesky taxation; the man is totally free to live his life as he sees fit. He has an honest, straightforward business relationship, the platonic ideal of free market capitalism. Or, at least, he does until thieves break into the man’s cabin, stealing his pig in the dead of night and leaving him completely destitute without any means to support himself. It could be a fable an economics professor at a Koch-funded private university uses to talk about the beauty of the free market.

This is the starting premise of Michael Sarnoski’s excellent new film starring Nicolas Cage, simply titled PIG. Cage plays a man we are introduced to as Rob, but who we discover is actually named Robin, a legendary chef who disappeared from Portland’s fine-dining scene after the death of his wife 15 years ago. With the robbery of his prized pig, he is forced to return to the world he tried to abandon in order to recover his beloved animal. Because of his extreme isolation and lack of possessions, he’s required to lean on his pretentious truffle dealer, Amir, for rides in a snazzy Camaro to attempt to track the pig down. Initially, Amir resists helping Rob, telling him that, without the pig, Rob is worthless to him. And this is where PIG really gets interesting.

Almost all the human relationships in PIG are transactional; money or favors that can be parlayed into future money pervade almost every exchange of dialogue. There has been a lot of hay made about PIG being “a profound meditation on grief,” but there is another reading of the film as being about coming to terms with the futility of trying to turn all of life into free market transactions. Amir tries his best at bargaining with almost everyone around him, but Rob is easily able to steamroll him with his insistence that without the truffle pig, both of them will lose their source of income. Amir agrees to take Rob to track down some methed out fruit-pickers who he suspects stole his pig. Rob is exactly right, but the meth heads have already sold the pig off and have no memory of who the pig went to. Amir reluctantly agrees to drive Rob straight into the heart of the seedy underbelly of the Portland foodie scene, where he meets a man named Edgar, plying him with an offering of some sort of food, which Edgar refuses, telling Rob that his name and reputation are worthless now. Edgar, it turns out, also stages underground fights between restaurant workers looking to supplement their mediocre wages by providing lurid entertainment and punishing their bodies in a more literal way than years of standing in a kitchen will do to you.

Rob puts his full name on the board and agrees to be beaten for a minute straight by a restaurant worker. It’s clear from the crowd’s reaction that his name still holds social capital in the Portland food scene, despite what Edgar tried to tell him. Rob takes a savage beating and remains conscious, winning something more valuable than cash: information about where his pig might be. With a fresh lead in hand, Rob is able to go to Amir’s apartment and sleep off his injuries. The next morning over breakfast, Amir tells Rob that he realizes the best date his parents ever had was at Rob’s restaurant; he also reveals that his mother committed suicide. Rob, in turn, reminds Amir how fleeting human life is, painting a horrifying image that one day a massive earthquake will flatten Portland, only to be followed by a titanic tsunami in the aftershock. Everything, all of the trappings of the high-end food scene that every character in the film devotes their life to, will one day be reduced to dust.

PIG is about realizing the promises of the free market are a lie. It’s about the pain of giving up everything we’ve been told is valuable in favor of facing the harsh reality that we all only have a limited time on this earth. So often, the choices we make in service of the free market don’t even seem like choices. The only way to stay ahead in a competitive market is to undercut your competition, even if your competition is your own son and getting the edge means destroying the life of a simple man who never hurt anyone. Markets always tend toward monopolization, and maintaining a monopoly always requires violence, even if that violence isn’t always as apparent as the punishment Rob endures. 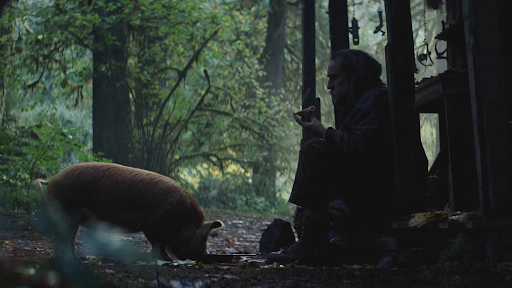 We have spent the last 40 years trapped in a state of what cultural theorist Mark Fisher called “capitalist realism.” With the collapse of the Soviet Union, there has been a near-universal agreement among establishment politicians and economists that there is no viable alternative to capitalism. In this time period, global wealth inequality has skyrocketed and the planet has rapidly accelerated to inches from a boiling point of no return. In the United States, every measure of quality of life has plummeted, incarceration rates and homelessness have exploded, life expectancy has dropped, instances of serious mental illness are at record highs, and private debts are in the trillions of dollars. The Intergovernmental Panel on Climate Change has just released an unequivocal report explicitly stating that the current global economic model is a direct threat to the future of life on this planet. And yet, when the free market is all we know, when it seems to be the only water we can swim in, it is impossible for us to imagine life could be any other way. Darius couldn’t imagine an alternative where he didn’t betray his son and ruin Rob’s life, because after all he had to keep paying the bills to keep his wife alive, didn’t he? Amir couldn’t imagine anything more valuable than his Camaro until he went on his journey with Rob, and realized dents in his car door meant nothing. Each of us, in our individual lives, has to grapple with the painful reality that the gains we have made, the finer things we all enjoy in our current system, will have to be shed if we want our species to continue.

That is not an easy process, it is a painful, grief-fueled thing that requires shedding everything we think is virtuous and valuable in pursuit of a deeper sense of truth and human flourishing. The only way out is to have the same bravery Rob has, to accept how much of society is structured on illusions that mean next to nothing in an existential sense, and to hold on dearly to the things that still hold meaning and truth for us. Sometimes, that’s a pig who is a dear and loyal companion. All we can do is nurture each other with good food and good music as the world rages around us in unrelenting chaos. Prioritizing our relationships, and our duty to each other, is the only way to survive as the market dies in front of our eyes.