Trying times are ahead in television, dear reader. We’re all waiting with bated breath to see which series will ascend the proverbial Iron Throne of Zeitgeist Television after Murderkill Dragon Hour takes its final bow next week. Will it be CHERNOBYL, the much-hyped miniseries from Ted Cruz’s former college roommate? Maybe! Will it be Comedy Central’s KLEPPER—the Chernobyl of Investigative Journalism? Probably not! All those thoughts and more below in this week’s TV roundup. 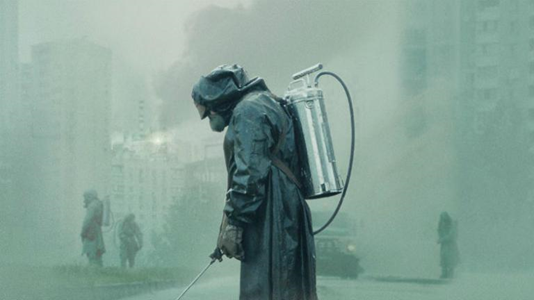 A feature I’ll likely never have the time to write would attest that the mini-series is the best television has to offer: introducing a long-form concept, allowing it to breathe and expand, and getting out of Dodge before things become bloated or diluted. As such, CHERNOBYL is already batting for the right team, picking up immediately following the moment on April 26th, 1988 felt ‘round the world and exploring the effort on behalf of the Chernobyl engineers and firefighters to contain the damage and the bureaucracy that challenges them at every term.

Sure, I don’t love that this is an Anglicized take where everyone speaks in exaggerated British accents or that the pilot takes the time to make it clear that S O C I A L I S M was the reason why this happened, but as far as a peak TV drama goes… hell yeah! The acting clearly comes from career professionals, the drama leans more into creeping dread than sensationalist shock value, and the oppressive specter of unquestionable loyalty to the state is far scarier than any of the (impressively gory!) renditions of nuclear radiation we’re exposed to. The more and more CHERNOBYL focuses on the more esoteric consequences of the disaster the stronger this show will be, but in the scrum to find something to watch after GoT wraps up, this seems like a quick ‘n’ clean drama worth getting invested in. [Thomas Seraydarian] 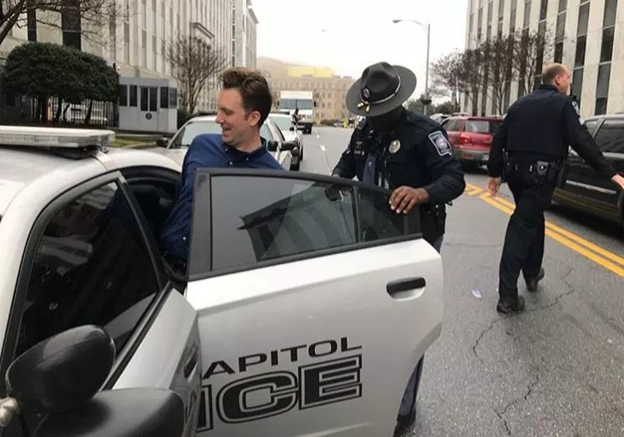 Us bleeding heart liberals love nothing more than a milquetoast white guy inserting himself into situations he has nothing to do with to make us feel bad about the world! KLEPPER is the latest Comedy Central offering from Jordan Klepper, the least famous DAILY SHOW correspondent. It’s a docuseries a la VICE, where Klepper travels around the United States examining various social issues and interviewing the people involved. Comedy Central’s website describes him as “on the front lines of American activism.” This seems somewhat accurate, but going off this first episode, I’d describe him more as “slightly adjacent to the front lines but very much cheering them on.”

In the pilot episode, Klepper meets a group of Iraq war veterans coping with PTSD through wrestling. I gotta say, it kinda rules. The three main veterans are charming and clearly have a lot of wrestling talent. Wrestling has entered the mainstream in recent years to the point that I—the least sports person who ever sported a sport—have some cursory knowledge of how it all works. However, it wasn’t until I saw this episode that I experienced how truly brutal some of these stunts are. It takes a lot of guts and talent to pull off a great wrestling show, and if there’s one takeaway I got from KLEPPER, it’s that I want to see more of these guys doing what they do. (Especially The Pizza Man—a mustachioed wrestler who throws pizza dough at his opponents, who appeared for only a fraction of a moment in this episode but captured my heart.)

And herein lies the rub, dear reader. I want more of the subjects and less of Klepper himself. I roasted a similar program, THIS GIANT BEAST THAT IS THE GLOBAL ECONOMY, for having the clunkiest title of all time—but at least you know exactly what it is. Having a self-titled show about the very real struggles you do not share feels off, and the fact that Klepper as a host feels deeply intrusive and unlikable drives the point home. I’m curious why this type of show is on Comedy Central, and indeed, Klepper mentions to a veteran in an interview, “This show is on Comedy Central so we have to find a way to make it funny.” All that being said, it is a well-produced program and it didn’t make me want to bury myself alive like most episodes of VICE do. Also, some press has come out that Klepper gets a little closer to the aforementioned “front lines” than he appears to in this episode. His heart feels like it’s in the right place, but KLEPPER feels like an odd duck among its socially-minded docuseries brethren. [Kate Brogden] 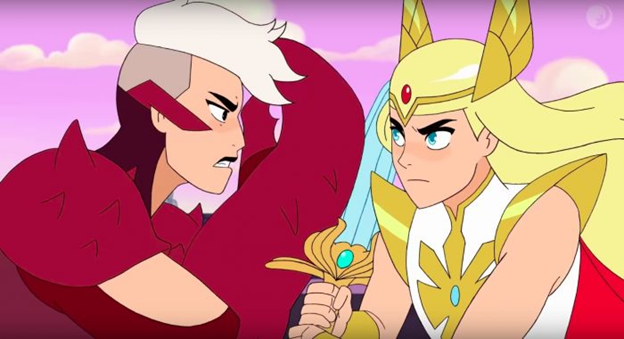 SHE-RA AND THE PRINCESSES OF POWER S2 (Netflix)

The first installment of Noelle Stevenson’s pastel-colored, LGBT inclusive reimagining of SHE-RA was one of my favorite TV offerings of last year. Season Two picks up right in the middle of the action with Adora, Glimmer, and Bow as they continue the fight against the evil Horde.

Everything we loved about Season One is back in Season Two. It still feels like a Saturday morning cartoon for the modern generation in the best way—lots of quippy action with a flair for the dramatically intense, but with an updated sensibility of character and relationships that certainly feels woke but never panders. Scorpia became a standout favorite of Season One and sees even more screentime in Season Two, continuing her trajectory to “most goodest wholesome bug mom on television.” In fact, we spend a lot more time in the Horde this season, offering a much-needed tonal break from the princess-of-the week format of Season One. Speaking of Princess of the Week, now that we’ve got our whole cast in the fold, there’s more time for fun setpieces including an entire DND-themed episode, which is just delightful. And while there isn’t a Big Gay Prom this time around, rest assured there is plenty of excellent Gay to go around.

Now, you see every time I said the word “season” up there? Go ahead and throw some big ol’ air quotes around all of those. The latest release caps out at a measly seven episodes compared to Season One’s 13. It ends on an enormous cliffhanger that feels more like a midpoint than a finale, and ultimately left me feeling a little cheated. Season One took until about halfway through to really warm up, dedicating the first half of the season to character building and setpieces before the real drama kicked in. Season Two has the same pacing, but instead of ramping up at the midpoint it just… ends. The good news is that “Season” Three drops as soon as August 2nd with Geena Davis in a principal role. My advice? If you enjoy the series but you’re not necessarily going to die if you wait a little more, hold your flying horses and give it a rest until later this summer when we can get the whole story. [Kate Brogden]