Lulu Wang’s sophomore feature—and runaway Sundance hit—the A24-distributed THE FAREWELL, materialized out of an episode of This American Life, itself based on Wang’s personal experience grappling with a lie her family conspired to tell her grandmother—namely, that the grandmother did not, in fact, have stage four lung cancer, and that she was going to live. Wang’s film, starring the very talented Awkwafina, is cute, and funny, and sure to put a smile on most peoples’ faces—I’d submit that this objective is completely at odds with the intrinsically sinister premise. Beyond the maudlin, affected, distinctly film festival-friendly visage of THE FAREWELL is a caustic and icky psychodrama itching to break free, but Wang has opted instead for an “uplifting” film—a decision that, judging from the film’s reception at the box office, was a wise one indeed.

THE FAREWELL finds Billi, a downbeat 30-something, thrown into turmoil after she learns her grandmother, Nai Nai, has been diagnosed with terminal lung cancer—Nai Nai doesn’t know, though (it is customary in China to keep the nature of a loved one’s illness from them, so as to not cause upset). In short order, a wedding is staged in China as a pretext for saying goodbye to Nai Nai before the cancer takes her. Wang’s script is flush with dialogue which will seem familiar and redolent to viewers who themselves are second-generation immigrants, and the Chinese cast is uniformly excellent. Wang has extracted wholly authentic performances from the ensemble, and every wayward musing or bit of incredulity registers truthfully. 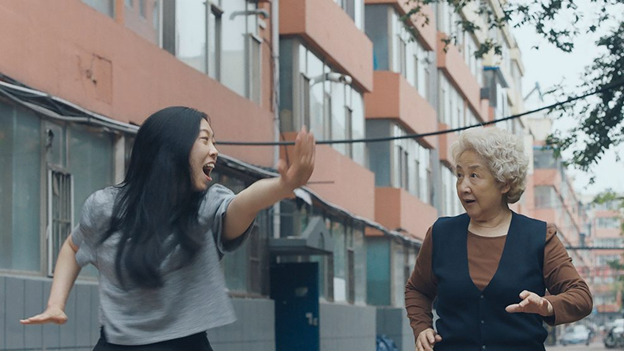 That said, Wang’s directorial efforts veer on oppressive, her camera exceedingly formal and prone to extended takes—a bit of an odd choice for the film she is making (more on this later), but she’ll also disrupt this rhythm with cheeky direct-address shots and one memorable rendition of a gleefully sadistic drinking game helps to offset the solemnity of the visuals. The ostensible central dilemma of the film is this: is the lie, as a doctor puts it, a “good” one, designed to carry the emotional burden for Nai Nai, or is it a cruel display of vindictiveness and flippancy, disallowing Nai Nai the opportunity to come to terms with her impending death.

The movie briefly allows discourse on this quagmire, yet it is always stiff—Wang is seemingly uncomfortable asserting a position on the conflicting West vs. East ideology regarding the dignity of the collective over the individual. The conversation is brought up and dismissed just as quickly, enabling more room for silly antics and scenes of stunted emotional resonance. After all, trying to pull off a lighthearted comedy and a meditation on death is a tricky balancing act, and Wang doesn’t quite have it in her. Perhaps if she allowed Billi to really grapple with the lie, we would be able to feel the intellectual pressure for which Wang is (sometimes) aiming.

As it stands, Billi is the film’s least resonant presence, despite Awkwafina’s considerable efforts—it’s as if Wang forgot that she can’t just insert herself into a movie without crafting an actual character. Mention is made of the fact that Billi is a writer but in awkward, truncated asides. Billi is the audience surrogate, sure, but she doesn’t have much impact on the narrative itself, leaving the film without much central thrust. Ultimately, Billi’s ambivalence is somewhat tedious to watch, even if it is ostensibly a more nuanced response than rage (toward the lie) or support of it full-stop. The picture is far too long, clocking in at 98 minutes, 15 more than is necessary to tell the story. Wang prolongs the proceedings as tirelessly as she can, even filming a very American Independent Cinema scene where Billi, in an extended tracking shot, runs through the streets of Changchun to avert a (hopelessly contrived) crisis as involving music plays behind her.

There is a hokey finale, and an epilogue in the credits which will tell you pretty much where Wang stands on the whole issue wrestled with in the film. THE FAREWELL exhibits a lot of promise for Wang as a filmmaker; her blocking is tight and sophisticated, and she can clearly pull good performances. But even though the lie is established as cultural custom, it almost surely would sew vestiges of distrust and paranoia in the family, and I wish she had tended to those emotional demands the narrative asserts. But most of all, I wish she had listened to the messiness of her premise/story. I’m sure the film is her attempt to make sense of the whole thing. Making sense of things is overrated.