If you’re anything like me, you like to unwind with a nice bath, a glass of rosé, and good ol’ fashioned homicide stories—complete with the grisly details of dismembering a body one day and walking into a family picnic the next. You know many serial killers by name, and of course you have a favorite (mine’s Jeffrey Dahmer). You attempt to dive into the sickest minds and figure out how someone from the exact same species as you could be more wicked and sadistic than you ever thought possible.

Well I’ve got news for ya, kid: you’re a Murderino.

This is what devoted fans of MY FAVORITE MURDER refer to themselves as, which is currently 227K strong on Facebook. Beginning in 2016, Karen Kilgariff and Georgia Hardstark followed their mutual curiosity into the true crime universe and grew an international empire in the process. MY FAVORITE MURDER has constantly topped the charts and become the top-selling live podcast, which is no surprise considering the undeniable talent and chemistry shared between the friends-turned-co-hosts.

The pair’s unique personalities and backgrounds—Kilgariff a stand-up comedian and television writer with credits including THE ELLEN SHOW, PORTLANDIA, and BASKETS, Hardstark the former host of UNIQUE SWEETS on the Cooking Channel—make for the show’s trademark blend of humor, chatter, and murderous retellings. Some listeners may find this dynamic distracting to the details—if you fall into that camp, a research-heavy podcast such as CRIME JUNKIE should be more your style. However, you may eventually find comfort in MY FAVORITE MURDER’s banter and grow to appreciate the feeling of having two best friends to shoot the shit with during your morning commute.

Kilgariff and Hardstark not only combine comedy with criminal cases, they also include a level of unfiltered realness seen only within your inner circle. They aren’t afraid to speak truthfully about mental health, addiction, politics, and their own inward battles, which uplifts the positive community they’ve built into an even closer unit.

The duo recently released a book aptly titled after their signature sign-off “Stay Sexy and Don’t Get Murdered,” combining their fascination of true crime with unapologetic personal essays and allowing more ways for listeners to get into their heads. It is Kilgariff and Hardstark’s level of candidness and relatability that ultimately creates a Murderino—and you can add me to the top of that list. #SSDGM 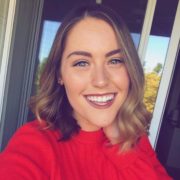 Mare Rozran
Mare Rozran is a Digital Creative Strategist at Taco Bell by day, but when she's not overseeing a photoshoot for the hottest new burrito, she's playing the drums, going to barre class, or bingeing DATELINE to prep for her own podcast, SWEET NIGHTMARE.

THE FAREWELL Makes a Molehill Out of a Mountain