We open on bursting microbes infecting whatever they can touch like biological landmines. A spreading virus invoking symptoms of the common flu actually has dormant protein chains of rabies that may worsen if mutations persist. Self-serious, zero-experience, self-publishing commentators make a mockery of the scare tactics by doctors pleading for the public to accept their dire warning about what they call The Alvin Virus. Things are going to get exponentially worse if we don’t act now. Your sniffling neighbor tells you about how the media’s pandemic hoax is a ploy to drive down stock prices. Also, this new virus “conveniently” popped up during an election year. Honestly, it’s funny that THE SADNESS even bothered to give its COVID stand-in a fake name. Miraculously produced in 2020, suckling off the teat of polarizing, edgelord comic CROSSED and pre-vaccine Taiwanese work conditions, THE SADNESS is most easily described as a zombie movie where the zombies are still living, uninhibitedly sadistic versions of the host bodies. Yeah, they cannibalize their victims, but add in blood orgies, organized murdering, testicle warping, and lurid taunting while they perform all of the above.

THE SADNESS strips away the sociopolitical and distills the previous two years into the suppressed stretches where we watched everyone around us die: the horror, the despair, and the depraved freedom of reverting to hunter-gatherer tribalism overnight. The shock of watching your local market turn into a police-monitored rations depot with lines down the block during April 2020 is translated here as a mob of the infected giggling as they snap a poor sap’s arm in half three times over. One of the earliest transformed zombies is The Businessman, played with a startling dedication to the entitlement of the modern lonely man by Tzu-Chiang Wang, who stands as a one-man case study in how empowering the Alvin transformation can be: the most innocuous amongst us could be waiting for the spark to act on their programmed impulses. Under the microscope of China, and ravaged by the physical and economic effects of the pandemic, Taiwan is one of many nations populated by those simmering at a quiet boil. Essentially, THE SADNESS is a vision of Taiwan if the entire country became its parliament. So surely, we’re being shepherded through this culture by a creator from the land itself! 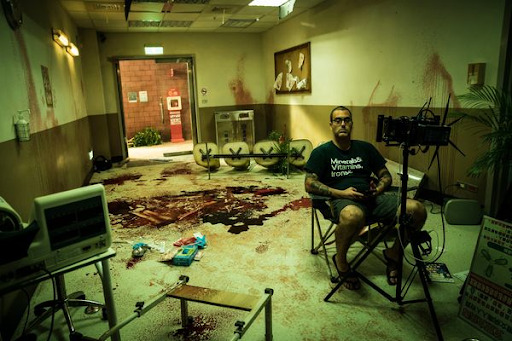 Enter Robbert Jabbaz, a self-taught Canadian filmmaker bankrolled by a Taiwanese millionaire who follows Gareth Evans in the modern tradition of white expats infiltrating Asian film industries to make the gnarliest grime possible. THE RAID series acts a tribute to Indonesian talents, its feats of martial arts and cinematography so astounding that the sea of corpses feel less like a filmmaker using a foreign nation’s bodies as commodities and more a dedication to the genre. This? This is… I don’t know man. It’s got some Lucio Fulci and the Italians futzing with Filipinos energy? In THE SADNESS, everyone in Taiwan is made of meaty chunks ready to be chipped away at. It’s quick, hungry filmmaking by a dude who’s clearly thought over and over about this moment in his career, and while the tastelessness of the proceedings call into question the ethics, it’s a mightily assured work. From the Looney Tunes inserts of gym bros about to get their faces axed to the eerily lovely scenes of an apocalypse in the working class stretches of Taipei, Jabbaz has a keen sense of place and humor. Sometimes the two collide to establish stakes: our protagonist is a freelance filmmaker. He has no skills. You’re following the trials of a guy who will undoubtedly succumb to the first wave of a killer outbreak. In a bit of seemingly fluffy exposition, THE SADNESS shifts the scales of wondering if he’ll survive to how long he’ll last.

It moves at a remarkable quip, until a nefarious doctor tucked away in a maternity ward drags the movie to a complete halt, Jabbaz miscalculating the academic appeal of his borrowed lore to that of abstract sadism. I was hoping THE SADNESS would devolve into high camp animalism, survival demeaned to a point of finding personal entertainment in the hellscape you’ve been enveloped in, but its final third goes the full Garth Ennis by projecting the wonts and failures of Taiwan’s lost generation onto a non-starter of an onscreen couple while they slip on floors coated with brains. The violence gets self-serious (oh, so the line you won’t cross is showing me a baby killing? Child’s play, buddy) and the sanctity of life in a film most exciting when it’s at its most primal is suddenly treated as sacred. It goes from showing nonstop macabre gags to vocalizing a JOKER retread on this sick, twisted society we live in. How about you go all in and reveal that The Alvin Virus actually wasn’t connected to rabies at all? That all these savages were triggered by a placebo effect implanted by a conservative majority crushed by their repression? All it takes is one domino. It’s a COVID-19 metaphor after all, right?

There’s no world where I’d recommend this to anyone but a gorehound, but the simplest pitch for a horror normie looking to dip their toes into some ultraviolence is to describe THE SADNESS as Naughty Dog’s THE LAST OF US and Gaspar Noe’s IRREVERSIBLE having a baby, written and shot by people far more interested in making an aesthetic companion to Romero’s DAY OF THE DEAD than spiritually exhausting you like the French would. Some actors are here for the ultraviolet B-movie, others are cast for their impressively performed responses to blunt trauma. On his first feature, Jabbaz is caught between the waves of tone—not quite thrashed underwater, but certainly not flaunting a backstroke. Everyone feels like they’re in a different story, a massive setback disallowing the film from achieving full subversion, but still congealed into one cohesive vision by the relentless, BRAINDEAD levels of gore. I’ve been around the block, and there are still times in THE SADNESS where I needed a breather. I told my mom about the very first kill: an elderly woman yoinks a line cook’s fryer basket and pours it over his head so she can scrape his cheek off his face like icing. Jaw agape, she recoiled in laughter. Jabbaz made a movie far too imaginative to be upsetting. He so expertly captures the feeling of an ideal midnight movie that it’s a shame the only thing more explicit than the sex and slaughter are his rehashed themes. 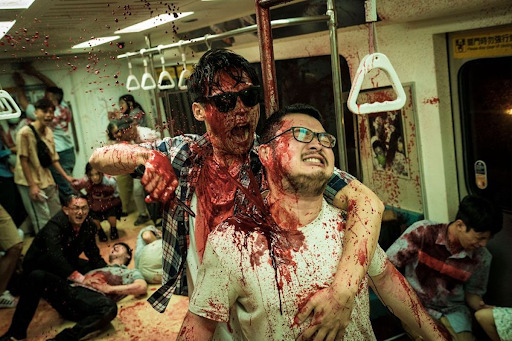 Other sequences of grindhouse carnage are revelatory beyond their base impact. The second act kick-off on the subway calls to mind multiple reference points—Tokyo train stabbings, white supremacist mass murders, and lone wolf attacks by weirdos on the fringe. It’s horrifying, familiar imagery, made more immediate by the newly infected passengers stabbing even more passerby after the initial perpetrator has been restrained by survivors making a citizen’s arrest. To live in the United States is to constantly be surrounded by the normalization of state-sanctioned violence, but THE SADNESS was a particularly jarring watch after the recent shooting by a Chinese national at a Taiwanese church in Laguna Woods. Cycles of violence persist, and this excellent scene exhibits the protraction of our shared bloodbath. One after another after another, and perhaps there is a demonstrative reasoning behind it, but best of luck trying to refocus your frayed emotions to a place of rationality beyond blanket acceptance that this is the way things will be. If you wanted to be extra charitable this giving season, you could use that takeaway to excuse the efforts of our stars. There’s no shock, Regina Lei and her one-eyed compatriot directed to stare and scream. Berant Zhu looks down at his sliced off fingers and just squints. Of the numerous movies THE SADNESS is trying to be, Jabbaz’s stars aren’t especially adept at what any of them ask them for.

In the 80s, mainstream cinema’s shift to brutish maximalism designed to appease the coliseum was mortally damaging to the cultural fabric, but it sounds a fuck ton better to me than having nothing but feel-good, diversity-mandated “return to normalcy” product slopped into my purview by executives who couldn’t give less of a shit about the new demographics they’re shilling to. We’ve returned to similar circumstances as everyone’s favorite, most fetishized decade in U.S. history, and I just wish our media was as scary as conservative commentators crack it up to be. THE SADNESS is what I imagine Sean Hannity thinks IN THE HEIGHTS is. What a wonderful world that would be. Jabbaz presents childish nihilism, while creating a worldview invariably worse than our own where Hell opens up and wraps its lips around us all before noon; in its barbaric, vulgar way, THE SADNESS might make you feel a little better about your life in the real world.