There’s a lot of web-comics out there. Many are structured like comic books, where the number and size of panels varies so you can let your imagination and artistic abilities run wild! It’s rarer to find a web-comic that is structured like a traditional newspaper comic, where the panels are uniform and you stick to a certain number of them each episode so the format is restrictive and can feel repetitive. It’s rarer still to find a newspaper-like web-comic that isn’t based on gags, but that tells a narrative, similar to how BOJACK HORSEMAN initially turned a lot of heads by being a serial “adult” cartoon, unlike THE SIMPSONS or FAMILY GUY. And that’s only one of the things that makes UNDEAD ED so great. 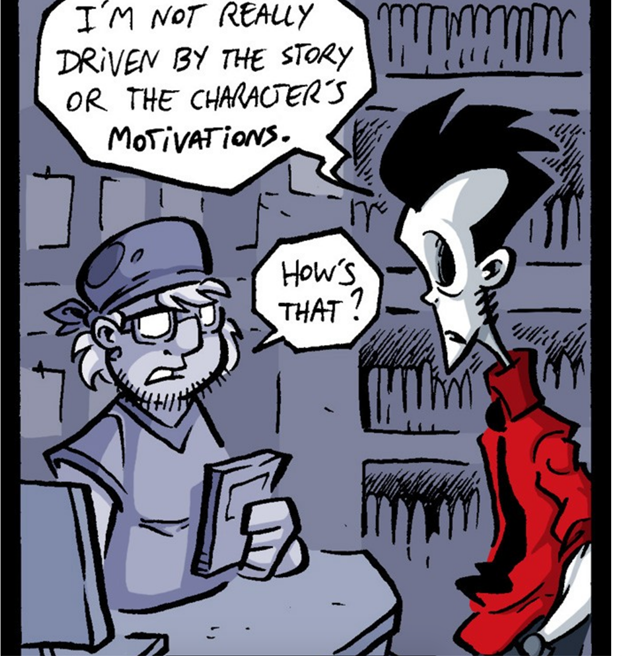 A sentence you will never say reading this comic

Posted on Webtoons from May 2015 to February 2016 by French cartoonist Boredman, UNDEAD ED is a 120-episode series (only about six of which don’t have four panels) about a salesman named Ed who wakes up one morning as a strange, undead creature. Armed only with endless sass and a permanent erection that serves as the series’ main running gag, the main narrative thrust is Ed trying to figure out what he is. Is he a vampire? A ghost? A zombie (which turns out to be a racial slur in this universe)? It’s a surprisingly intriguing mystery for what is labeled on Webtoons as a comedy, and while I did not read it while the series was initially coming out, I would definitely have been at the edge of my seat every week waiting to find out what Ed actually is.

Ed could easily be an irritating, down-on-his-luck, lovable protagonist who gets outshone by his more eccentric co-horts: a gay vampire bouncer, a loony moritician who uses him for experiments, and a government scientist who weeps tears of joys when his creations rebel against him, to name a few. However, Ed becomes a relatable figure within a dozen episodes, as he loses his job due to being legally dead and becomes increasingly frustrated when his search for answers only leads to more questions. The story does not coddle him when he messes up, and his comedic outbursts never feel overblown or overused. 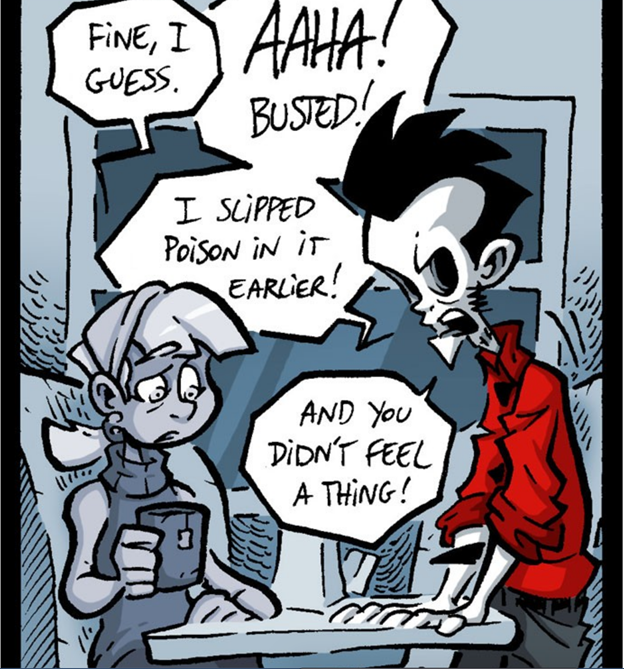 I promise you, there’s a good explanation for this

One would expect a series like this to either feel like a comedy with a story sprinkled on top or a narrative with jokes sprinkled throughout, and yet UNDEAD ED feels like neither. It doesn’t use the plot and characters as a delivery mechanism for jokes, but instead uses the jokes to develop the world and the characters. Even while rereading the comic for a second time, I was laughing at nearly every episode, but I was also struck by how little excess or fluff the series contained. Every episode contributes something to the mystery, the characters, or the mythos, and the comedy never feels superfluous to the situation. Each character has a different sense of humor, and there are no contrivances that make you groan at how the author had a punchline in his head but no way to tell the joke without throwing all logic out the window. Bonus points for only one jarring cut-away gag and zero pop culture references! 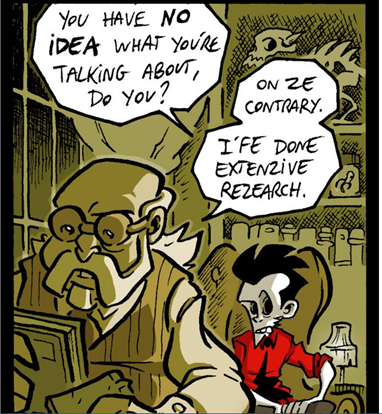 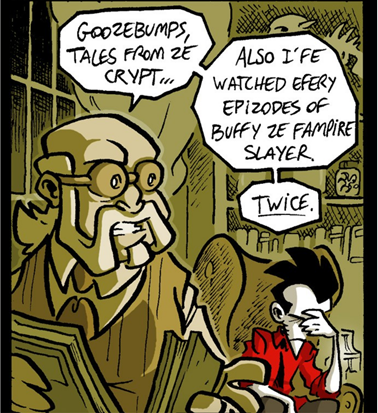 Okay, almost zero pop-culture references… (but at least these develop his character as a charlatan and don’t feel that out of place)

There are plenty of freely structured web comics that use that freedom to present the story in new and unique ways, but many don’t use it to its full potential, creating a lot of wasted space and time that could easily be cut down. While Boredman’s later work would abandon the traditional format, UNDEAD ED is proof that the only limits in the traditional format are the writer’s own skills at construction and pacing. The art, while appropriately macabre with distinct character designs, is drab at points, and one character’s sudden integral role makes more sense when I learned they play a larger part in the sequel. Nevertheless, it is the comic equivalent of an ant carrying 5,000 times its own body weight: in a small package, it conveys so much charm, humor, intrigue, imagination, and character.