I’m not the biggest fan of superhero movies, but maybe I would be if more of them looked like AQUAMAN. James Wan’s plunge into the icy blue waters of DC has everything we’ve come to expect from movies about men in tights: jacked, wisecracking good guys, self-righteous villains, mountains of exposition, romance, battles, and a heaping of CGI to make it all come together. It would be a lie to say AQUAMAN strays from the formula, so why didn’t I suffer though it like I did during so many other modern caped capers? The fish are nice, but it’s the sheer confidence AQUAMAN exudes that’s the real showstopper.

Before we get too far, let’s address the elephant in the room: Marvel movies may be the biggest thing in Hollywood, but they look like ass. Each and every entry in the MCU has lifted from IRON MAN, but the problem with copying a 10-year-old movie is that you’re going to end up looking like a 10-year-old movie. There’s no excuse for why the Vibranium mines of BLACK PANTHER look as dismal and dull as that Eastern European airport that gets demolished in CIVIL WAR, nor is it acceptable that either could have been feasibly recreated with the technology available during the filming of Favreau’s gamechanger a decade prior. 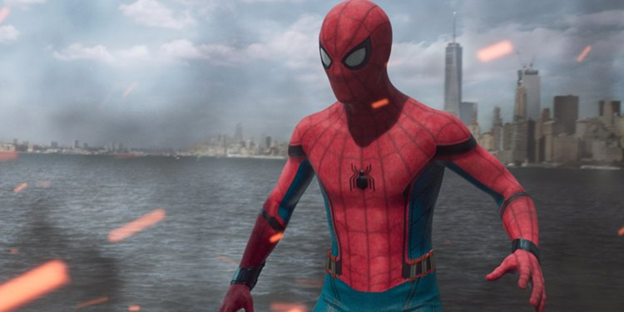 How the hell does a movie look worse than a video game?

But more egregious than the subpar CGI is the boring camerawork so prevalent in the franchise. WHAT WE DO IN THE SHADOWS may be the funniest movie to come out in years, but I want to know what was going on in the office that led a group of producers to exclaim “Now THAT’s the man we want directing the next Thor!” Taika Waititi, Shane Black, and if we’re being honest, Joss Whedon, excel in their particular arenas, but those have never been multi-million dollar, action-driven blockbusters. Their MCU entries may have all the spectacle you’d expect, but they are not framed in particularly compelling ways, and in this genre, that is the only thing that matters.

From its opening shot, it is immediately obvious that AQUAMAN is here to raise the bar: A lighthouse in the middle of a hurricane is illuminated by bolts of lightning, a striking image sold by a severe low angle that could easily have been taken from INSIDIOUS. AQUAMAN is peppered with moments like this; transitions into snowglobes and tracked flythroughs of buildings that, while nothing a regular moviegoer hasn’t already seen, are not the kinds of shots we associate with superhero films. But as it turns out, what worked in THE CONJURING also works here. 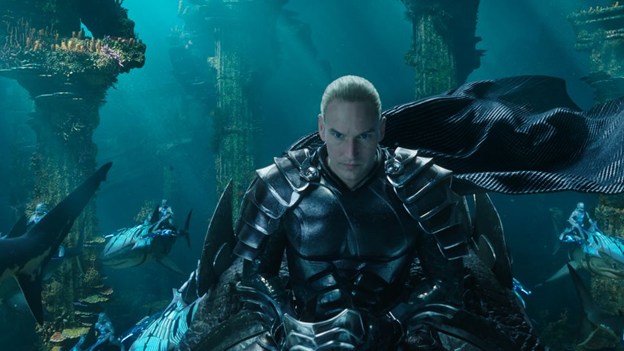 Patrick Wilson hates going into The Further, moreso when it springs a leak.

The Earth of the DC Extended Universe is larger than life, a bizarre world populated by aliens, dinosaurs, and long-lost civilizations. It’s a surreal landscape that demands a surreal touch, and Wan delivers. Wan’s background in horror fits AQUAMAN’s comic aesthetic like a glove. The heightened reality, exotic visuals, and brand of humor are far more in the tradition of Sam Raimi’s Spider-Man trilogy than anything that came after it, and I’m talking about the heights of 2, not the lows of 3. AQUAMAN is following a checklist, but is unique among its contemporaries in that it still feels like Wan’s film, not the studio’s.

Without ever delving into the garish depths of Ang Lee’s HULK, AQUAMAN is a self-aware, tongue-in-cheek roller coaster with plenty of Big Dick Energy to spare. The world has been waiting for Jason Momoa’s star moment ever since he crowned Viserys Targaryen, but it took Wan pairing a shot of the man emerging from the ocean to an honest-to-god Pitbull remix of Toto’s “Africa” to make that happen.

That confidence does come with a caveat, however. AQUAMAN carries itself with bold and bombastic poise, but it also clocks in at a bloated two-and-a-half hour runtime. The movie introduces two separate villains, both of whom have potential for future appearances, and visits pretty much every underwater venue in the DC playbook. Wan made sure all bases were covered in the event a sequel wasn’t greenlit, but as the film is already projected to outsell WONDER WOMAN, one can only wonder which parts of the ocean floor remain unspoiled for the inevitable follow-up. 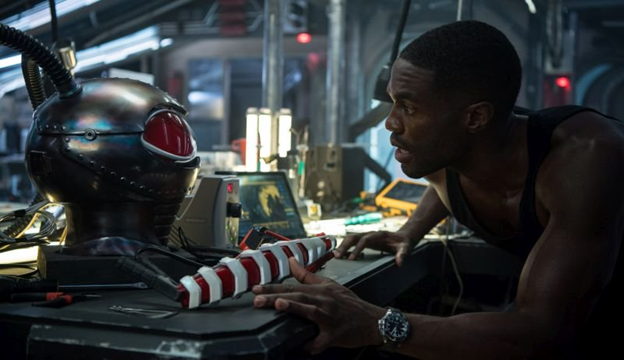 The next generation of 3D eyewear. You’ll feel every punch in AQUAMAN 2.

Knock the DCEU all you want, but at least it lets its directors do their thing. This has led to some spectacular backfires: JUSTICE LEAGUE’s production fell apart after a sudden change in leadership, and it’s no wonder SUICIDE SQUAD turned out the way it did when it had the same guy who did BRIGHT at the helm. And yet, it also has the potential for some incredible opportunities: thanks to WONDER WOMAN, Patty Jenkins is now a female director that your average theatergoer can name drop, which is way more of a feat than it should be. Wan is far from an obscure name, and with FURIOUS 7 under his belt, he can’t even be labeled as “niche,” but AQUAMAN cements him as one of the most versatile creatives in Hollywood.

Even if Wan isn’t attached to the sequel, I hope that DC taps more talent from the horror sphere to step up to the plate. A Cyborg movie from Ti West? Sign me up! An origin story for The Flash from Ari Aster? Why the hell not?! AQUAMAN isn’t perfect: there’s plenty it gets wrong, and it’s not quite the watershed event that IRON MAN or THE DARK KNIGHT were, but this ship doesn’t sink—it swims. In a world of cookie-cutter comic book adaptations and sequels, AQUAMAN is not only fun, but different. If WONDER WOMAN is the queen of the genre, then AQUAMAN has a worthy claim to be king.