Many things can be said of the cinema of Tarantino, but perhaps the one thing we all so often forget to acknowledge is just how much he actually loves what he does. No filmmaker in modern cinema belts out his love for the movies quite like Quentin. He is enamored with not only its history, but its mystique. Its ability to influence culture and fuel a subconscious fire,  whether that’s through the dangerous workings of propaganda films, or the grand allure of Hollywood premieres.

As such, it will probably come as a shock that the Tarantino film tracking the Manson murders also happens to be the sweetest film he has ever made. ONCE UPON A TIME IN HOLLYWOOD is the most personal Tarantino has ever been as a filmmaker, delivering a crash course on “what if-isms,” a careful reminder that anyone’s life can escalate into cinematic extravagance through little more than timing.

It’s a concept he has studied for decades now. PULP FICTION was an entire canvas of bad luck incidents avalanching upon a cast of unwitting protagonists, a visual menagerie that depicted cinema and its characters as players in a game of battleship. And I decidedly say battleship because chess would imply that these characters have some kind of acute awareness of where the next hit will come from, but that’s exactly where Tarantino, master architect of mayhem, comes in. 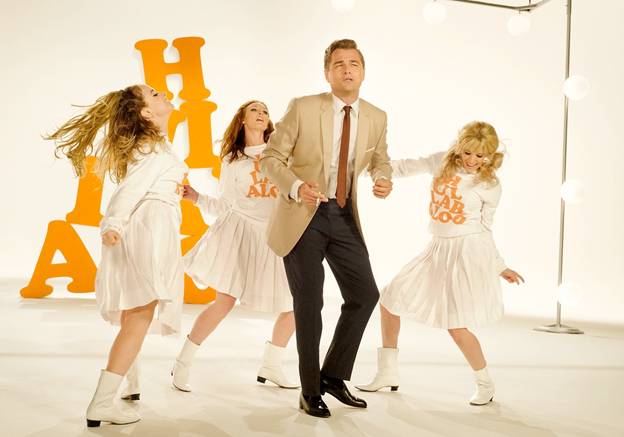 Similar to how Bruce Willis could easily have absconded from L.A. unscathed had he not hit a red light at exactly the same moment Ving Rhames crossed the street, the characters in ONCE UPON A TIME IN HOLLYWOOD face thicker brush strokes that ripple through an entire industry. Their luck (good or bad) doesn’t so much affect them in the immediate moment—there’s no chase that leads to a car crash that ends them up in a pawn shop’s torture dungeon—so much as slowly but surely affect the greater clockwork that is the Hollywood machine. Just when DiCaprio’s Rick Dalton thinks he’s a has-been, chance encounters allow him to spring back up into brief moments of regained relevance (however phony it may be).

But why do Brad Pitt and Leonardo DiCaprio’s accidental “wrong place at the wrong time” encounters echo through the canyons more loudly than Willis’ absconding with his girlfriend? Well, because they’re movie stars, and what applies to them also applies to the rest of Hollywood. When you’re a public figure, everything you say or do is placed on a pedestal, a spotlight that not only affects you personally, but the state of an entire industry. And though Pitt’s Cliff Booth often appears confused as to why Rick’s comfortable late-career low seems to bum him out so much, we as viewers do understand just what it means to see a celebrity’s star sizzle out. 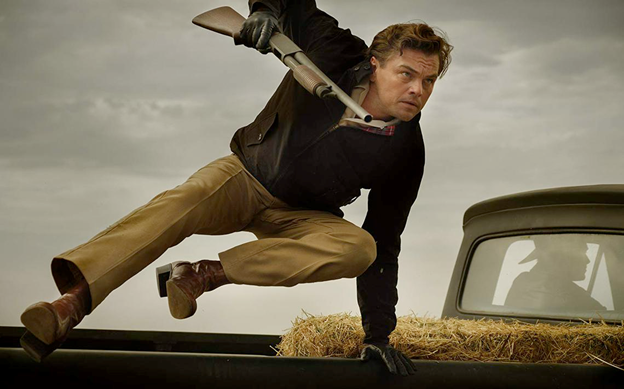 Pictured: A celebrity who will literally never sizzle out

And although the laymen boxers, hitmen, petty crooks, and mob boss girlfriends of PULP FICTION can experience a far more rowdy day-to-day than the stars of ONCE UPON A TIME IN HOLLYWOOD, something as minor as a former western television star wrestling with his fading relevance reveal themselves to be of major importance—not only to the aforementioned star, but to their fanbase as well (from Al Pacino’s hotshot fanboy to the garish director of the movie Rick Dalton is acting in).

Stardom is the beating heart of Hollywood. It determines who flies to Italy to make Spaghetti Westerns, and comes with a shelf life that is constantly readjusted pending an individual’s future chance encounters. It’s Tarantino wrestling with his own timeworn identity in an industry that lives and dies by youthfulness. But perhaps more importantly, it’s Tarantino’s reminder that we are only irrelevant if we allow ourselves to become complacent in the face of a changing industry.

And this is precisely what Tarantino seeks to steer clear of in ONCE UPON A TIME IN HOLLYWOOD. This is not just another Tarantino film, making its unique personality undeniably clear within the first half hour. Gone are the verbal sparrings and the tense, Hitchcockian set pieces of INGLOURIOUS BASTERDS or THE HATEFUL EIGHT. For lack of a better word, Tarantino bids adieu to the “movieness” of his yesteryear, opting for a narrative structure that more strictly resembles a naturalist exploration of real life. It is not only Tarantino revealing his capacity to do something other than the exploitation flicks he has been making since KILL BILL, but also him doffing his hat to a burgeoning trend of late-2010s films about feelings and places instead of clear-cut stories. No other film breathes like ONCE UPON A TIME IN HOLLYWOOD, because Tarantino’s love for the winding streets of the Hollywood Hills is his alone, and we are watching it in step with his heartbeat. 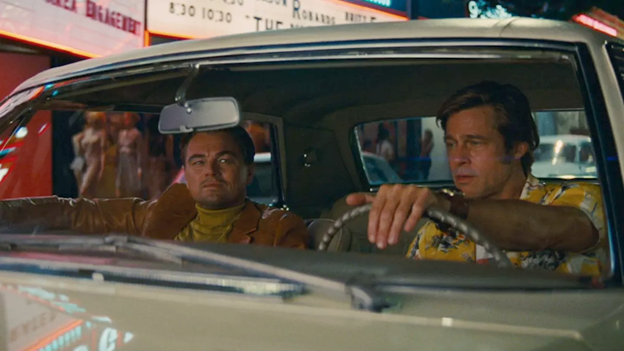 Sure, Tarantino’s characters are all larger-than-life personalities (standard practice when your protagonists are movie stars), but more importantly, Pitt’s Cliff Booth and DiCaprio’s Rick Dalton register as individuals that were not just conceived to exist within the rectangular confines of Tarantino’s viewfinder. They are real human beings out of frame, just as much as Robbie’s Sharon Tate and Emile Hirsch’s Jay Sebring. It is Tarantino’s reconfiguration of history: a romantic revision of an era, built around the simple “what if” of throwing just one more celebrity (and his stuntman) into the lineup of Hollywood celebrities.

And it is with this realism (mind you, it’s still a Tarantino film, so don’t expect him operating like Chantal Akerman) that ONCE UPON A TIME IN HOLLYWOOD is able to explore the one thing Tarantino has never been able to visually express in his eight preceding films: the event horizon that marks the transition of our mundane lives into the cinematic. A study of the precipice where we reach that delicate interface of living a life that feels a little more like a movie. Whether that’s through a near-death encounter or an ascent into stardom doesn’t matter: what does matter is that somewhere along the line your life has been irreversibly changed to the point that a random passerby on the street has the potential of recognizing your face. And that is precisely the magic of Hollywood, an industry with the capacity to turn faces into icons.

It’s the End of the World and We Know It: The 1975 and Framing Fatalistic Art