Science fiction is an entire genre devoted to curiosity, discovery, and exploration. Devoted to guessing where we’ll go from here. It’s inherently prophetic and philosophical, but also makes time to demand fun. New gadgets and new worlds should be fun! In science fiction, you have to be willing to make Edgar Allen Poe an artificially intelligent hotel host, to make humpback whales save the world, to make the new roommate an alien—and to make people believe and care about that. Throughout my life as a sci-fi stan, I’ve spent a lot of time defending science fiction (and protecting it from false sci-fi claims), and while I suppose I do understand the initial, “How can you support a genre with a movie where humpback whales save the world?,” my forever response has been, “How could I not?”

Science fiction can take place in any time period or location, it can be about humans or aliens, be a comedy or a drama or a thriller or a satire; its plot just has to depend on a hypothetical scientific advancement or discovery and/or a world created by it. Sure, it’s normally space and planets and aliens, but this is a genre that covers everything from STAR TREK to ALF, often mixing with other genres along the way to give us dozens of subgenres and influences. One of the fine lines in sci-fi is staying just grounded enough that it could ~hypothetically~ actually happen. This technology could actually exist, this world could actually exist, these people, etc. Maybe not in hundreds of lifetimes, but it’s possible. And a genre about nothing but possibility is something that I can get behind. Max Headroom (ABC, 1987-1988). A cyberpunk satire about an AI newsman and corporate corruption. Fun Fact! My family’s dog growing up was named Max Tailroom, which my parents thought was hilarious.

Additionally cool, these tech possibilities sometimes eventually take shape. Take the story of the self-lacing shoes from BACK TO THE FUTURE 2—on the exact day that Marty McFly traveled to (Oct 21, 2015), Michael J. Fox was given working self-lacing shoes by Nike, who designed the shoes for the movie almost 30 years prior (Nike has since auctioned off several of these to benefit Fox’s Parkinson’s research foundation). Would we have these shoes without Back to the Future? Maybe. But the fact that a movie was able to show this idea, and then see it work in front of them within their lifetime? That’s cool to me. A lot of times, science fiction is just showing us a new cool thought, but it’s also daring us to make that thought a reality, and it’s showing us that science fiction is a genre that seeks to have a direct impact on the world. Self-lacing shoes, for all we know, will eventually be available to any with mobility disabilities like Parkinson’s. It doesn’t matter if the new cool thought is a piece of technology or if it’s “black women in space,” science fiction offers up goals that might be worth working for.

When done properly, this is a genre that takes the false dichotomy between science and the arts and pummels it into the ground. Growing up in the Silicon Valley surrounded by tech bros, I assumed they were raised, like me, on STAR TREK and the like, and that their interest in science came from the same desire to join Starfleet that mine did. Only I found that in actuality, many of them hadn’t seen STAR TREK, which is quite possibly why several of them were terrible. Essentially, I spent many years watching robots building robots, and developing an increasing understanding of where supervillains come from. Of course many of them were nice—many scientists are wonderful nerds trying to help people, but I’ve witnessed such a lack of understanding for any creativity that didn’t directly result in the work at hand. Well, either a devaluing of art or simply a disinterest in it. But there is no job that doesn’t require both technical ability and creative thinking. Film and TV themselves are outstanding examples of this: despite the importance of scripts, nothing happens on a film set without an ungodly number of talented technicians. All art is technical and all science is creative, and to insist they be separate is to stunt them both. But when they work properly together, as science fiction often hopes we do, we get self-lacing shoes.

Sci-fi is also a genre that can’t hide what it’s about. Dramatic, Earthbound storytelling, if you’re into that, has to be much more subtle with its themes, and subtlety is really hard to do well. Science fiction never hides its ulterior motive—it’s often the only motive. A prime directive, one might say (leave me alone). There’s something refreshing about an entire genre that wears its heart so blatantly on its sleeve. Watching science fiction tells you something about the writer’s view of humanity—even a show as wacky as MORK AND MINDY is also a show that is literally about being nice to aliens. ALTERED CARBON essentially boils down to a warning that if we restrict access to technology to the rich, humanity will cease progressing. It’s not that these philosophical arcs should override character (or plot, or good writing, or structure), character is obviously important, but it’s about taking those relationships and putting them in the context of the greater advancement of humanity. What effects do the actions of one or two people tell us about where humanity can go? That balance of high philosophical argumentativeness and objectively ridiculous plots surrounding space whales, or PACIFIC RIM’s “we want to build giant robots” is something my heart and mind can always settle on. A genre that is equally batshit and not at all batshit.

I also believe that one of the greatest hallmarks of sci-fi, worldbuilding, is an undervalued skill. Worldbuilding is one of the most fascinating things science fiction does—and to think that only science fiction has to do this is lazy storytelling. But sci-fi demands it on another level. Science fiction asks us to ask questions about these worlds. Look at Syfy’s THE EXPANSE (A VERY in depth world, even if the characters aren’t the most engaging), which frequently asks things like if we’re living in space, what happens to us medically? Does that create subcultures? Does that change our perspectives? What are our new limitations? If we need resources from the asteroid belt, how would being an asteroid minder work? What would labor organizing look like? What would another planet’s government look like? Worldbuilding creates rules, and then I can delight in seeing characters interact with those boundaries. Science follows rules, so even if we’re bending some hypothetical discovery, sci-fi still has to assign rules to it to keep it grounded, and stories that incorporate that level of thought impress me and draw me in. I love seeing how willing sci-fi is to put constraints on its characters. Doctor Who’s sonic screwdriver works on everything . . . except wood. There’s something so impressive to me about the extra work creators go through to tell a story from the ground up that I have to keep watching. And there’s an art to worldbuilding through visuals and dialogue versus a cringey voiceover infodump (again, something non sci-fi can learn from). “Dudes on a ship” shows like STAR TREK and DOCTOR WHO often build a new world every episode; WESTWORLD has built two so far, with more to come in its next season. That constant innovation and the production design that comes with it to me makes even bad episodes worth watching (. . .  to a point). And generally in order to escape from these new worlds, the answer lies in approaching the unknown with wonder and diplomacy rather than fear or prejudice; a scientist would be the first to tell you that assumptions often impede discovery. Sci-fi isn’t an infallible genre, there is plenty of bad sci-fi (and there are plenty of action movies in space that think they’re sci-fi), but dissecting bad sci-fi is infinitely preferable to dissecting bad anything else, partially because regardless of the show, breaking down a new world and seeing how much meat there is is in itself fun for me. If you can make me believe in your world, I might just listen to what you have to say about mine.

Like it or not BLACK MIRROR, everything in our world is defined by technology. It informs how we eat, sleep, work, how we consume our media. When technology changes, so does our culture, and I think it’s useful to do what science fiction does, and decide whether to be inspired or scared by what we’re now able to create and how we’re using it. Science without a humanitarian conscience is a bad thing, and an entire genre devoted to why that might be a bad thing is, in this world, a very good thing. And I like art that does good things. If a piece of science fiction isn’t making a statement about that, it’s either poorly executed, or it’s not sci-fi. In a way, these shows and films put a ticking clock on us getting our collective shit together while simultaneously showing us what we’re working toward and showing us what might prevent us getting there. These stories can be about intergalactic pirates that want to inspire us to keep exploring and being good to people. Or they can be a warning about the power technology grants us. Or they can be about space whales. 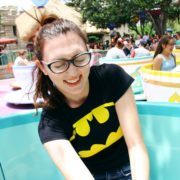 Teresa Zarmer
In addition to trying to convince strangers on the internet to become emotionally invested in dadcore TV shows from the 1970s, Teresa eats a lot of breakfast food and complains about people who complain about network television.