Can you say “ennui about American life told through a lens of science fiction and fantasy”? That’s what TV Land brought us hot and fresh this week! We got Amazon’s kind-of answer to BLACK MIRROR and a YA series about screaming teen witches. Enjoy our latest thoughts! 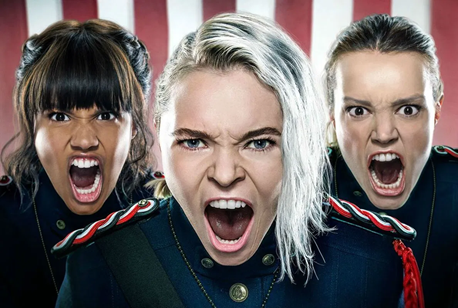 MOTHERLAND: FORT SALEM can’t be faulted for a lack of ambition or originality. Where other supernatural-teens-saving-the-world series (*cough* SHADOWHUNTERS *cough*) rely on derivative rules and characters of magic, Freeform’s newest offering delivers an original concept—if not an entirely successful one.

The show focuses on three 18-year-old girls from varied backgrounds across the United States who, willfully or not, join the Army—the witch Army, that is. Back during the Salem Witch Trials era, old-timey witches negotiated a deal: to end their persecution, witches will be conscripted into the Army to fight for their country. Fast-forward to the modern Conscription Day, when young witches say an oath to a glowing orb in their bedroom then head off to basic training at Fort Salem, a prep school/army base. Here, you get all the classic army school tropes: marching, bunk beds, drills, lesbian energy, screaming, emotional manipulation, and so on. The main villain of this world is a militant terrorist group called “The Spree” who may or may not be on the right side of history after all this. Oh, and one more thing: the witches’ powers are brought forth by singing and screaming. It’s as clunky as it sounds.

As convoluted as its premise is, MOTHERLAND should get credit for attempting such a novel, if not strange, intersection of themes. The ideas of patriotism, feminism, duty, and family introduced in the pilot could be a strong foundation for the exploration of some really meaningful storylines. But maybe we shouldn’t get our hopes up. In the pilot episode, there’s a scene where it’s revealed that all witches have a tattoo-esque mark somewhere on their body, which is fine and all. But then, the worldly, rich girl from the city explains to the country girl that the mark becomes shiny when a witch loses her virginity. Like, what the fuck? It’s moments like these that suggest that Freeform may not be the platform best suited to execute such a high concept premise thoughtfully.

It’s CADET KELLY meets AMERICAN HORROR STORY: COVEN meets AMERICAN SNIPER with all the problems of each, executive produced by Will Ferrell (not kidding, fact check me). Take that for what you will. [Kallan Zimmerman] 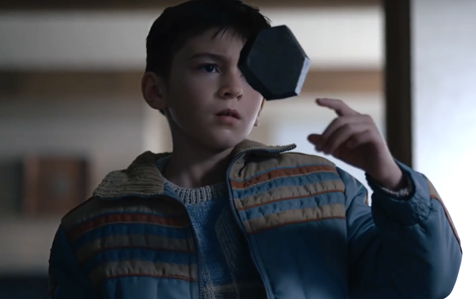 TALES FROM THE LOOP (Amazon Prime)

Surreal times call for surreal television. Amazon Prime’s new series, TALES FROM THE LOOP, follows the residents of a small town in Ohio as they deal with the consequences of a large, mysterious machine operating underneath their town called The Loop. The series is based on the work of Simon Stålenhag, an illustrator and writer whose work often places science fiction concepts in rural, suburban, and small-town settings. This Amazon Prime series (on which he is also an executive producer) stays true to his visual style and tone in an anthology format. Each episode follows a different person or family as they deal with something extraordinary, in some way connected to or caused by The Loop. For example, in the first episode, a young girl tries to learn more about her mother’s secret experiments, but accidently slips into another version of her town where everyone treats her “differently.” The stories only get stranger and more personal from there, mixing robots, science in disarray, and the very human concerns surrounding growing up and living in the shadow of your parents.

TALES FROM THE LOOP is effective in its approach of creating a very strange, sci-fi world; however, most episodes of the show are too long. It clearly takes a lot of inspiration from the original TWILIGHT ZONE series, though that show’s run-time was much shorter at only 30 minutes with commercials. TALES is frequently longer than an hour, and often that extra length is not used to develop the world or serve the self-contained story, but mostly functions as beautiful filler. Despite that, the world of TALES FROM THE LOOP is fascinating. It’s a slightly worn and rundown world that cleverly uses technology both as set-dressing and metaphor, creating a setting that’s in-between modern times and the robotic future, without being heavy-handed. TALES FROM THE LOOP is an interesting take on technology and enjoyable for how it feels more sci-fi than horror or even satire, unlike other shows like BLACK MIRROR, but it’s missing the refinement and story structure that could bring it to the next level. [Wyatt Lemoine]