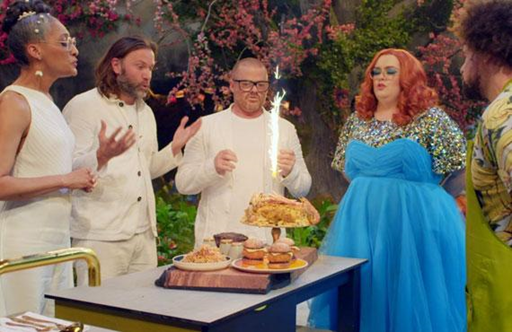 As the kids (our parents, in all actuality) like to say, “What a trip!” At first CRAZY DELICIOUS hits the synapses as an absolutely mind-melting, brain-frying menagerie of good taste contention. A fully edible, lightly fantasy-themed setting? Professional chef judges casually proclaimed as gods that flutter down from their ALICE IN WONDERLAND-ass pedestal to rub elbows with the mere mortals cooking them food? Innumerable cutaways to host Jayde Adams that have her turn to the camera with dead eyes and bite into wine glasses that are apparently constructed of candy glass and also cuddle with an inordinate amount of amiable woodland creatures? Ahhh!!! Ultimately feeling like Stoned Fox by the end of the first episode, I can’t say I was all that charmed by CRAZY DELICIOUS’ take on the standard Food Network fare, albeit much more… darkly, darkly “whimsical” during the pilot, especially since the judges are all at least two degrees meaner than anything you’d see on your standard cooking competition. But once I let myself catch my breath during the second episode, I began to see the potential appeal. You see, if you’re going to attempt to “elevate” the fundamentally underdog conceit of the cooking competition show, which has its roots in the humble home chef having a chance at something loftier and more regalized, you might as well make it fucking insane. And somewhere in the scrum of an ostensibly amateur chef being able to so perfectly roast a watermelon that it’s the spitting image of a cooked Christmas ham, the judges coming down during crucial cooking stages and absolutely dunking on the contestants’ efforts so far, leading to visibly sweaty panic attacks as the timer clocks down, and the fact that, once again, the host is given wonton range to wander around EATING THE SET, an element that NOBODY ELSE seems to be privy to or willing to participate in, and… you’ve got me signed up for this hot mess of a haute cuisine hodgepodge. Fuck it. Why not. Cue up the next episode maestro. [Thomas Seraydarian] 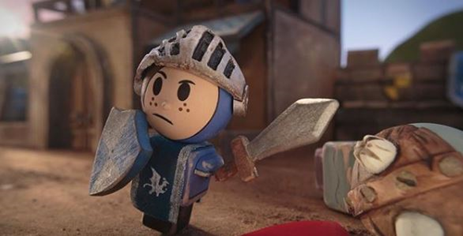 The new stop-motion animated comedy CROSSING SWORDS is the hottest new thing in town if the Hulu ads that constantly assault me every time I open the app are to be believed. I was curious about this show anyway, as I’m always a big fan of different medium styles, and the armless wooden Lego character designs intrigued me, so when I finally sat down to watch through an episode, I was disappointed to find that it’s fine, not good, not great, just fine. There’s nothing inherently terrible about it, but there’s nothing that elevates it or sets it apart, either, and in a day of seriously envelope-pushing hilarious comedies, that’s a real point against it.

The plot is simple enough; our main character, Patrick, has dreamt of being a knight his whole life, and sort of gets his wish in the first episode when he finds himself in the employ of the royal family. There’s a colorful cast of characters around him: his siblings, who consist of a Robin Hood-esque forest bandit, a pirate queen, and a literal clown, a dimwitted wannabe knight, and of course, the king and queen who can’t stand each other—their marriage is falling apart because nagging, cheating wives are hilarious, amiright guys? On the surface these characters seem like they’d be just rife with jokes and wacky situations, but unfortunately they mostly sit on the sidelines while Patrick makes his way through lukewarm punchlines that feel like they were taken from a flopping improv performance.

All that being said, the characters are cute, and even though there were no real laughs that I can remember, there isn’t anything incredibly offensive, either, so it’s fine to put on while grandma’s in the room. Take it or leave it, CROSSING SWORDS is fine, not great. [Anna Mansager] 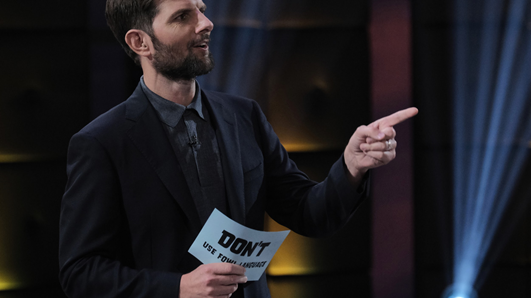 Nobody likes a tryhard. And while effortless gags abound, DON’T has the manic energy of a child jamming objects up their nose, begging anyone at all to marvel at what they consider a monumental achievement. It’s tough to hate on a show filled with happy screaming people and Adam Scott, but DON’T manages to grate me in that special way only a bad game show can.

Each of the five challenges in this pilot combine basic game show questions with a goofy physical element. The questions are too easy to stimulate the inner trivia nerd, and the slapstick gags are like WIPEOUT but without the water, height, and sense of whimsy. There’s a pepper-eating challenge that reminded me of HOT ONES: THE GAME SHOW, so that was the episode’s highlight. Low points include the minute-long staring contest and the overly cushy physical punishments. The contestants lean towards the DEAL OR NO DEAL type of game show participant; they love the spotlight, but don’t always know what to do with it. Adam Scott lays down a barely noticeable performance perfectly deserving of whatever paycheck he’s there to collect. I guess this is worth getting that beautiful man paid his due, but just barely. [Dan Blomquist] 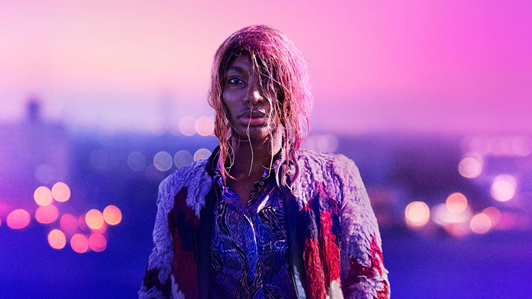 I MAY DESTROY YOU (HBO)

I haven’t quite been able to say whether or not I enjoyed I MAY DESTROY YOU. Saying that I did feels strange because the premise of the show isn’t one to particularly enjoy, but to experience. I came into the show blind, yet having an understanding of Michaela Coel’s tone through her vastly underappreciated debut, CHEWING GUM. In a way, I’m glad this was my introduction to it as Coel succeeds in bringing the viewer along to fill in the facts of the show as she discovers them in real time. However, for those who want to know or, more broadly, need to beforehand due to difficultly consuming content that centers around sexual assault: the show features around Arabella, an author struggling to complete her second book. After a night out, she wakes up in a stupor, unable to fully comprehend in the events of the night before. It’s only in the second episode when she cobbles the pieces together and realizes that her drink was spiked and she was raped. Shows that feature assaults through roofied drinks aren’t particularly new (i.e. VERONICA MARS), but it’s hard to think of one that handles the experience with such honesty, realism, and care as I MAY DESTROY YOU. As Arabella reckons with what happened to her, the show wades through the stages of trauma and grief that include denial and deflection. What’s perhaps most incredible about the show, however, is not simply its poignancy, but its humor amidst the anguish. Throughout the show, Coel weaves dark humor to the discomfort, making the show and the mind behind it feel exceptionally thoughtful, brilliant, and strong. [Anna Thorup]