Three years later and has US even been memed? Having a screenshot of your film used as a temporary lexicon reaction pic is hardly the mark of great art, but it is a crucial checkpoint for cultural objects, the works of which Peele is infatuated with. It might not have taken a full blown pandemic—the slushy response to the already forgotten TWILIGHT ZONE reboot, a cancelled HBO series that ran for a single season, a dead-on-arrival Nazi-hunting ripoff of THE BOYS that lived on the same streaming service as THE BOYS, and a limp CANDYMAN sequel may have done the trick—but a break from the pattern of expectation has benefitted Peele’s work as creative foreman. Three years in between directorial efforts has benefitted his latest. NOPE manages the illusion of laying out its predictable beats thrillingly unpredictably. In the eye of 2020’s storm, Jordan Peele retreated from the collapse of the visage of American stability by pilgriming to the Mecca of Muybridge, creating a film of looped cycles: his third cold-open setting up a pseudo-antagonist’s backstory, one failed pursuit of photographing an alien after another, and the film resetting itself for the next gambit through title cards of the animals used as pawns for humanity’s bidding.

First things first: I don’t think anyone needs an explainer to understand what’s happening in NOPE. Secondly: I do think it requires a bit of mental legwork to help it cross the finish line. NOPE is designed to whip up a flurry within the most annoying “Reddit told me my theory was wrong” puzzle box viewers, while simultaneously giving the “just turn your brains off, you’re overthinking it” populace snobs another film for their pile of dumb, loud art. What’s so frustrating about NOPE is that it’s only partly about everything that it’s about. The UFO is both what we must look away from *and* look directly in to escape our own woes? Tying it all together is like putting a stiff bed sheet on a mattress, doubling or tripling back to the same corners after the opposite ones have come undone. The most tapped out viewers will likely feel as if they’re watching four different screenplay concepts strung together, as though Universal knocked on Peele’s door to see what he had ready, so he briskly stapled together the nearest pages of notes in reach. After all, did any of us write anything remotely constructive during quarantine? 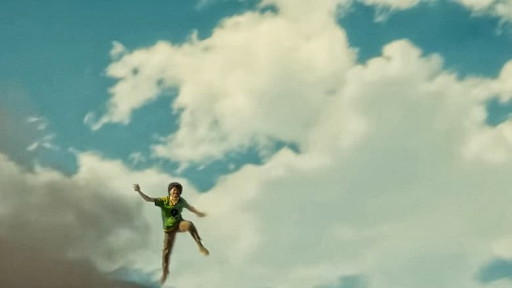 Peele’s films can feel like a laundry list of focused shower thoughts, where some are just for the lulz (O.J. bullishly speeding on a bucking bronco, the GORDY’S HOME studio cameras resembling the alien merchandise of Jupiter’s Claim, plotting the masterplan with Monopoly game pieces), but many of the finer details are so galaxy-brained that it convinces you there’s got to be more meat on the bone: tasking Nolan’s cinematographer to poke fun at the mystique of a grizzled DP while staging a climax riffing on INCEPTION, correlating the Haywoods’ trained animals (and those not fit to be trained) to the Haywoods’ own subjugation to judgments of worth, and a photo opp found at the bottom of a well. The way the camera sweeps from the horror of the sky and past Kaluuya to the barn slats that frame a fleeing stallion in cabinet card style stop-motion is a grace note so impressive that it warrants the hyperbole following this filmmaker’s warpath. The most horrifying, brutal moment is shot inside a blanket fort and the attacking force looks like a sand dollar wearing a tablecloth, Peele managing to turn Ed Wood theatrics into versatile frights. He could get away with little green men if he wanted to, but he opts for something equally concrete and abstract, for his own entertainment but largely for the sake of pushing an audience to a familiar, yet head-scratching destination.

To remove it from a meta understanding of film history, it still stands sturdy. NOPE is a movie about refusing to say “nope” in the face of responsibility both personal and greater than you, and how distant siblings find common ground in the abduction of their horses—first sold en masse to pay bills, then hunted by a UFO—who, like them in the capitalist grind, exist as both livestock and family. It’s very cute, very structured, and very satisfying. Palmer delivers a rousing, if conventional, star-making lead performance, and an incredibly human portrayal of an annoying sister to boot, but Kaluuya shows off his best work yet, hiding his pervasive fears under heavy breaths just like Gandolfini. He’s fucking arresting. Same goes for Yeun, who’s both the richest and most underutilized element of the whole movie. NOPE has its heart in the Haywoods, but there’s a spark to this traumatized Korean cowboy that makes you wonder what a whole film about his weirdo, huckster self-healing would look like. 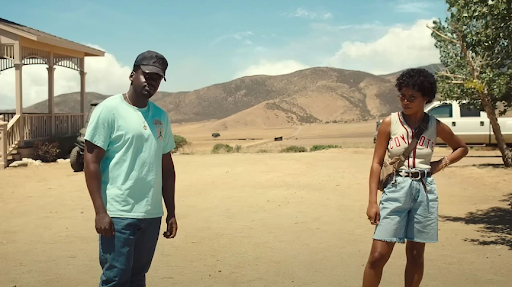 NOPE’s full use of it’s two plus hour runtime lets your eyes scour the backgrounds as if they were real vistas, but it also leaves pregnant pauses for nitpicks: the audio cues come in a few seconds too early and it makes everyone have an awkwardly delayed response to the power outages, Jupiter’s Claim has as many staff members as attendees, and there’s the constant confusion as to why this movie takes place during present day if its current elements are treated as perfunctory set decoration. That final point might not be much of a nit-pick, actually. NOPE is looking down the barrel of the modern nihilist era of Pink Sauce and TikTok ushering a hyper-capitalist generation of individualist grifters, and the best you have to contribute is 2008-era Oprah interviews and warmed over jokes about TMZ reporters? For the most part, NOPE is bypassing the bottleneck of allegory for a truth deeper seated in emotionality and sense-memory. The alien is meant for clinical commercial viewing, and a Black filmmaker captures photographic proof of the most awesome sight on planet Earth, but in a film of nigh dispassionate reactions to intergalactic anomalies, it’s Emerald seeing her silhouetted brother perfectly framed as mythic folk hero that finally drops her jaw in a state of teary awe.

Lauded as the next Carpenter or Spielberg, Peele works to prove himself with a pre-established chest of toys, but it’s difficult to not let your own imagination soar when Muybridge’s creation of the moving picture itself is the fulcrum point of what ends up being a good ol’ fashioned monster movie. You keep wishing the movie would move past its characters’ pursuit of the impossible shot, or at least interpret that odyssey less literally. This could have been about Tulsa, this could have been about Christianity and the function of The Bible in Black labor, how overseers persist their oppressive surveillance in a milky cloud. NOPE’s finale sees the ensemble ditching the cars and tech for horses and handcranks, physically spouting the old guard’s vouch for analogue over digital, despite GET OUT already mastering the commentary of camera phone as awakening eye into racial inequity five years ago.

Jordan Peele uses the first 40 minutes to connect every dot, and the final 40 crosses over the same connections with highlighter. In a surprisingly remedial flashback insert, we learn of sibling beef that’s transcended decades over the training of a horse named Jean Jacket, Emerald’s mount that she’s been excluded from caring for by her father in favor of selecting Junior as his immediate descendant. Peele shortcuts the catharsis by having O.J. name the UFO “Jean Jacket” and calls it a day. Of course, there are the dots that avoid his ink altogether: is a shoe standing perfectly on its tip a sign of an extraterrestrial presence, or is it merely another bad miracle? CLOSE ENCOUNTERS OF THE THIRD KIND also shows its full hand around 40 minutes in and shows you some alien spaceships careening down a small town highway, so NOPE isn’t without precedent, but Spielberg’s film becomes less about the details of extraterrestrials and more about the fealty humans have to a higher calling. For a little bit, Jordan Peele has similar intentions, until he succumbs to the temptation of crafting a large-scale entertainment far more tangible and basic. The kindest can say he’s blending RAIDERS OF THE LOST ARK with JURASSIC PARK, while I’d offer up that he’s playing with THE LOST WORLD and DUEL. 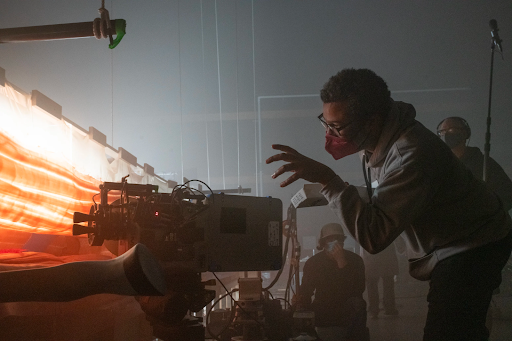 When Jean Jacket unfurls, I wanted to see the light of God, not just some creature’s final form. The Gordy sequences knock you so far off your comfortable ass that I wanted a genre movie assuming that level of confrontation, a stream of moments that leave you wondering what movie you’re watching. For better or for worse, NOPE is true to its Schroedinger’s Cat patterns until the triumphant end: self-defeatingly cohesive, but also dutifully incoherent as A-to-B moviemaking. It increases its potential in displeasing everyone in trying to satisfy anyone, which is, in another wraparound act of simultaneous success and failure, a pretty exciting thing to experience. There’s no better testament to the concurrent simplicity and density of NOPE than Logan Paul writing a shockingly coherent ten-Tweet-long thread of criticisms that are as valid as they are ape-brained stupid. The movie is spread too thin across five characters, but it’s kicking around enough of a germ of a thought with each of them to not mind that they’re all fighting for time. Well, except for Brandon Perea, who I have no clue why his character isn’t played by Barbie Ferreira (appearing in a thankless “cameo” if we can even call it that) or why that character takes up space in the movie at all.

It’s not that Peele works to directly communicate with a Black audience (though he certainly still does), it’s that he’s keen on tapping into the life experiences of the most layman viewers rather than accommodating eagle-eyed analysts awaiting a new mystery from one of cinema’s most consistently exciting voices. Jordan Peele is one of our most important brands. And yet, my cousin has no fucking clue who Jordan Peele is. Characters in NOPE mumble, they curse under their breaths, can barely form the sentences to express their wants after lifetimes of social conditioning, and over-excitedly exclaim their passions when attempting to break through that conditioning. US was written for audiences coming back from GET OUT. NOPE was written for those coming back to their local AMC. A warm embrace, but slyly spitting at their feet while it rests its head on their shoulders: you don’t have to go home, but you can’t stay here.