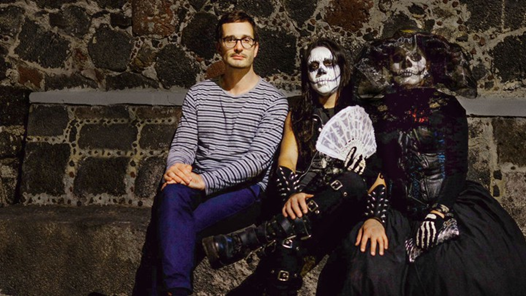 Originally assuming this to be some kind of Aaron Mahnke joint after the modest success of LORE, I was pleasantly surprised to discover it was instead a David Farrier (of TICKLED fame) joint. As can be expected, Farrier’s endearing nerdiness is as charming to watch here as it was in the documentary that brought him into the spotlight, but results are somewhat less definitively commendable. There’s a sort of undeniable draw to DARK TOURIST, which is ultimately what the entire premise banks on: humans have a difficult-to-define death drive that calls us to the morbid and macabre, and the entire industry of dark tourism scratches the itch that the show is delivering via proxy. So yes, I can’t say anything other than that watching Farrier grimace and cringe his way through a Mexican exorcism and an African voodoo festival is entertaining on some base level, but there’s a distinct reason the episodes set in the US feel a bit more . . . wholesome? Genuine? The implication that there’s some sort of exploitation or joke to be had on the denizens of foreign countries that Farrier speaks to is hard to shake, and I think both the show and the dark tourism industry in general need to reconcile the sort of winking disbelief and mild disdain exploring the literal dark corners of foreign cultures apparently manifests. This is most evident in the Japan episode, where Farrier and the tourists that accompany him on a bus to Fukushima push their well-meaning host to the point of sullen silence, regularly criticizing him and the intentions of the tour they all willingly paid money for, despite needing him to negotiate with the police after they don’t listen to his advice and enter a restricted area. As such, DARK TOURIST ends up slightly too unsavory to recommend, although clips from it would perfectly line up with any Vice videos you watch on YouTube in the wee hours. [Thomas Seraydarian] 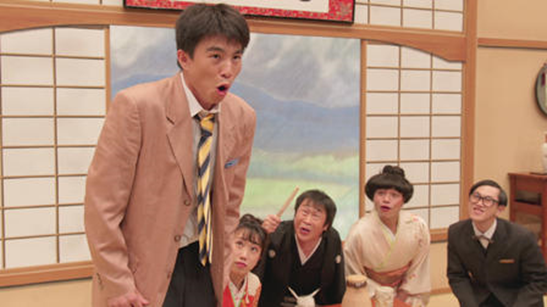 JIMMY: THE TRUE STORY OF A TRUE IDIOT (Netflix)

Hideaki “Jimmy” Onishi, a Japanese comic and TV star from the ‘80s, never made a huge splash in the United States. As such, JIMMY: THE TRUE STORY OF A TRUE IDIOT doesn’t carry the weight of most career recaps. But JIMMY is meant to function both as a retrospective and as a stand-alone sitcom, loaded with scenes that aim for laughs rather than historical accuracy.

Starting from humble origins as a slow-witted baseball savant, Onishi falls backwards into a career at prestigious talent agency Yoshimoto Kogyo by striking up a friendship with superstar comedy writer Sanma Akashiya. The ensuing hijinx mostly center around the age-old premise of Jimmy, a kind but simple person, accidentally screwing everything up.

Unfortunately, the jokes themselves often feels stuck in the past, and JIMMY frequently resorts to misogynistic tropes. While this might be an accurate depiction of the time period, the jokes present themselves without irony or self-awareness. As a result, they often wind up sounding uncomfortable, or just plain rude. I’m all for the exploration of the history of comedy, and to do so without including offensive material would be impossible, but it needs to acknowledge the negative consequences of that material as well.

That said, I can appreciate dumb shows.  Wildly over-acted and rapidly paced, JIMMY throws 10 jokes a second in the hopes of landing two. But Onishi’s numbskullery usually endears rather than frustrates, and while the dramatic moments deploy with the subtlety of a ham-fisted gorilla, it’s nice to see a slight range of emotion. I give JIMMY props for what it does right, but I don’t think it’s funny or gripping enough to warrant 10 hour-long episodes. My love for stupid shit only runs so deep. [Dan Blomquist] 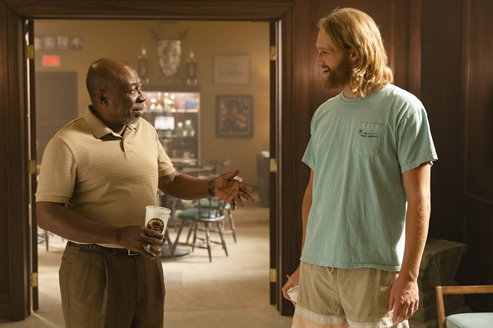 While watching the pilot for AMC’s latest drama series LODGE 49, I couldn’t help but wonder how the show came to premiere on a major cable network. LODGE 49 is by no means bad, but rather so different than almost any other new series that has premiered this year. Wyatt Russell stars as Sean “Dud” Dudley, a homeless, deadbeat ex-surfer in Long Beach who decides to join a mysterious fraternal lodge after the death of his father. The show is filled to the brim with lost souls: Dud’s twin sister Liz (Sonya Cassidy) works as a struggling cocktail waitress trying to pay off her late father’s enormous debt. Ernie Fontaine (Brent Jennings), the second-in-command at the lodge, has been waiting for the better part of a decade for the lodge’s leader to retire so he can take over. However, the strangest aspect of LODGE 49’s first episode is how laid-back it seems: unlike most pilots that move at a breakneck-pace, LODGE 49 eases you in and takes its time. While this may not excite everyone, the pilot felt like a breath of cool air and, for me, makes LODGE 49 one series I’m curious to return to over the next few weeks. Though it will never attract the viewers of BREAKING BAD or THE WALKING DEAD, LODGE 49 has the makings of a cult classic, from its meandering plot to its offbeat humor almost out of a Thomas Pynchon novel, and looks to be one of the more original TV series of the past five years. [Ethan Cartwright]

Is METEOR GARDEN good? Not really! But does it lead down a fascinating cultural rabbit hole? Absolutely. In 1992, BOYS OVER FLOWERS was published as a manga series written and illustrated by Yoko Kamio. It has since gone on to yield an anime adaptation, two Japanese television series, a South Korean adaptation that was the most popular overall, and two Taiwanese adaptations, one of which was retooled into METEOR GARDEN, a show coming from mainland China. If your head’s not spinning too hard, you’ll soon be hit with the realization that this story and these characters really, really resonate with East Asian audiences, and in general, the pervasive cultural template of BOYS OVER FLOWERS and how and why it enjoys such unprecedented appeal would be a fascinating thesis to explore. But alas, dear reader, I do not have the time myself to explore it, so we’re left with METEOR GARDEN as a show on its own merits. Telling the story of Shancai (Shen Yue), a teenager from a rough-and-tumble family that is accepted into the most prestigious university in the country, only to clash with the spoiled, rich clique of heartthrobs known as F4, saying “we’ve seen this all before” is literally true. It’s nice to see Shancai boldly stand up for herself and establish agency, but from a narrative perspective having a direct blueprint from which to map out the plot cuts METEOR GARDEN’s knees out from under it. As with some other Chinese exports such as THE MERMAID, the rapid-fire editing heightens the generally goofy comedy into intermittently enjoyable bits of something approaching the surreal, but the wooden acting on behalf of the supporting cast doesn’t do it any favors. It is refreshing to see this “pop” of a look into China’s youth culture, however, and the members of F4’s fashion alone is worth at least a gander. But overall, if you want the true BOYS OVER FLOWERS experience, the Japanese adaptation’s probably your best bet. [Thomas Seraydarian] 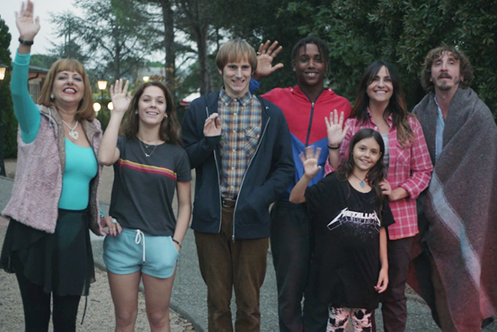 WELCOME TO THE FAMILY (Netflix)

The traditional nuclear family has been a staple of comedies and sitcoms since their inception, and WELCOME TO THE FAMILY, a popular Catalan import, pokes fun at this trope in its opening scene and proceeds to lambast it over the course of its 55-minute run time. Angela Garrofer lives peacefully with her brother-in-law and three children (an adorably violent little girl, a science-loving idiot-savant with some manner of mental disability, and a black teen who sadly gets little development) until her apartment gets repossessed and she has to beg for help from her wealthy, stuffy father. However, his untimely death forces Angela to conspire with his new wife, a flamboyant, aging actress, to hide the body when they learn they aren’t included in his well. Billed as a fusion of SHAMELESS and MODERN FAMILY, the show’s quirky premise and characters result in hilarious setpieces involving hiding bodies and drinking bleach to fool the cops, and its familiar yet slightly cartoonish production design helps the more absurd moments go down easier. The brother-in-law is the breakout star, hitting that balance of layman wisdom and weasley smooth-talk that makes slacker characters so endearing, and the new wife’s teenage daughter is a great, acerbic straight-woman to the rest of cast’s shenanigans. Most of all, the show’s benevolent, empathetic depiction of Angela’s bizarre family is refreshing, and will carry viewers normally opposed to this awkward brand of comedy.  We’ll have to see if the show can keep throwing interesting premises at us or fall back into familiar comedic tropes, but I for one feel very welcome in this FAMILY. [Blake Michelle]