2019 already has a contender for best of the year. ESCAPE ROOM, while not a particularly thrilling adventure, is a thematically labyrinthine, postmodernist near-masterwork—the film operates as a massive indictment of major movie studio ethics and the sadistic dehumanization tactics of contemporary horror with a vitriol completely foreign to mainstream filmmaking. ESCAPE ROOM examines PTSD with more grace and insight than does Lynne Ramsay, dissects the jagged intersection of black success and corporate capitalism, and offers a multi-pronged, full-throated assault on millennial hubris. It’s kind of awesome.

We’re offered bare-bones exposition on six characters as they gather together in an antiseptic highrise to solve a notoriously difficult (and mysterious) “Escape Room,” a geographical phantasmagoria that will push its players to the very limit. Character details are dispensed with the sort-of mechanical glibness that’s typical of mainstream horror fare. One player is shy, the other a failure, the other a success story, etc. This is not to the film’s detriment: in fact, to the contrary, ESCAPE ROOM utilizes these stock caricatures and familiar moral positions to comment on the state of horror cinema in 2019. I’m most reminded of 2018’s BREAKING IN, a sadistic, cynical feature emblematic of everything currently wrong with horror/thrillers—namely, that watching people suffer is entertainment in its own right. ESCAPE ROOM serves as a meta-cinematic satire on the types of situations that BREAKING IN presents with a straight face. Characters are purposefully opaque, and the filmmaking deliberately inauspicious, all the more to enhance the feel that this is a legitimate studio entry. Of course, it’s something much more special. 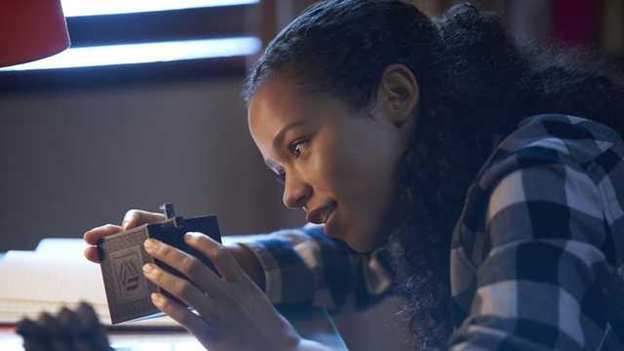 The scene where the six strangers meet one another is one of the more perplexing movie scenes in recent memory. It’s played almost completely straight, the screenplay dabbling in literal ennui, offering moments of genuine boredom in between the impotent foreshadowing and lazy exposition. We get the sense that these are actually people, talking about their lives in such a meandering fashion, it’s actually quite shocking that this scene wasn’t cut considerably. The scene only furthers the film’s central premise: that being, we’ve lost the ability to delineate between fictional characters and people. Every good screenplay book will tell you that you are not dealing with “characters,” you are dealing with people, flesh and blood, who have more than one defining trait. The inability to respect characters on screen as “people” points to a mass dehumanization, in a world where Virtual Reality and Bezel-less Displays is only splaying the gap between reality and simulacra.

The film deals with PTSD through flashbacks for each character, which, normally, I would dismiss as being reductive of trauma and a lazy way to tell the story. And, well, it is, but it’s all under the guise of a deceptively smart endgame, a game whose pieces have been weathered and deteriorating for quite some time, waiting for the right studio outlet to express their rage at their constant annihilation. The film’s use of inserts is particularly revelatory, with a blackly comic shot of a flask used to denote a character’s alcoholism speaking volumes about the way mainstream filmmaking appropriates addiction and trauma, and converts them into defining character traits.

Set pieces are passable, bolstered by decent effects work and a commitment to environmental reactivity shared by the ensemble that makes things that much more visceral. The ensemble itself is pretty standard fare—though there are several analogs in the film worth mentioning. The paragon of corporate capitalism is a black man—significant not only for its inversion of race roles but also because the film’s ostensible (white) protagonist refers to the capitalist as having an “American Psycho vibe.” Psychopathy has been almost the exclusive domain of whites in cinema, and there’s something to be said about the trait being assigned to a successful black man. 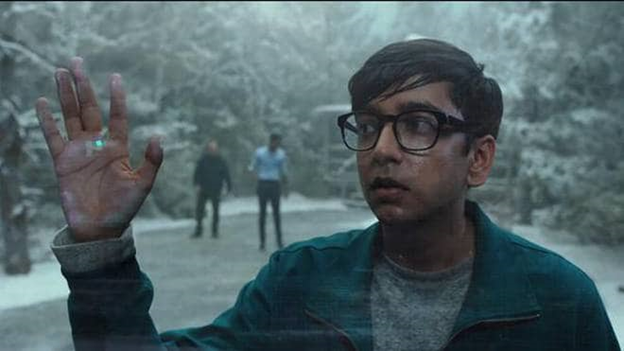 Why are you sweating dude, it’s like freezing out!

The film’s big reveal is not necessarily surprising, but the idea of a “Games Master” and “players” almost directly mirrors the relationship between “Filmmaker” and “characters,” and there’s the implication that the art of writing itself is inherently reductive, incapable of properly capturing the human essence. There will be many who deride the film. And it is certainly understandable, there is nothing terribly interesting going on here on a formal level and my interpretation of the film is certainly controversial (an unintentional masterpiece is still a masterpiece). But I think that, were it not for the last 10-or-so minutes, ESCAPE ROOM would certainly have been one of the great horror films of the 2010s. As it stands, it’s still incredible, as furious a film I’ve seen from a a major studio in quite some time, a film that does not sit idly by: a high concept, bait-and-switch operation that I can see easily becoming an item of cult worship in the years to come.