It’s been five years since Gareth Edwards’ unfairly maligned GODZILLA kicked off Legendary Pictures’ so-called MonsterVerse, and two since KONG: SKULL ISLAND promised a modern-day Clash of the Titans. But a lot has changed in that time. INFINITY WAR and ENDGAME have come and gone, perhaps permanently altering the film landscape in their wake, while JOHN WICK has carved out his own niche by forgoing that model in favor of leaner, meaner action. Yet, despite their prevalence, it seems to be a tough time to get a franchise up and running, even when the key currency is name recognition. Warner Bros. floundered trying to emulate the MCU in its early efforts, and we know how that turned out: today, the DCEU is known for its tonal fluidity, more than anything. And, of course, Universal’s “Dark Universe” was dead on arrival. Even the almighty Star Wars has had to step back and regroup. So, where does that leave a movie like GODZILLA: KING OF THE MONSTERS, the latest entry in the longest-running franchise in movie history? In hot water, apparently.

It’s taken me a couple of days to come to terms with it, but, even after resetting my expectations for a big, dumb monster movie after the fact, KOTM is not good. You see, I was SO hype for this movie! I’ve been a huge Godzilla mark for about as long as I can remember, but even the fanboy in me would be hard-pressed to call this a good movie. The plot is—predictably—paper-thin, but somehow it barely manages to serve the simple, core need of seeing monsters beat the crap out of each other. And while every member of the stellar cast gives it the old college try, the dialogue is so stunningly, exhaustingly bad that I found myself not caring about any of them. (It feels kind of wrong to single someone out, but every time Bradley Whitford opened his mouth I felt myself die a little inside.) That, and there are simply just too many damn characters and subplots in what is supposed to be a movie about monsters beating the crap out of each other. Atrocious writing aside, the film’s gravest sin is its inability to focus on the monsters, which, again, MONSTERS! 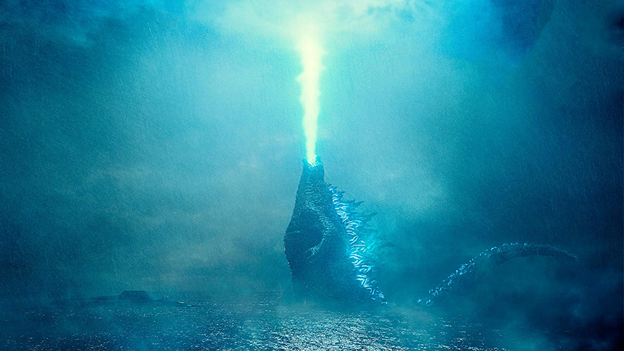 That said, I will wager that anybody who goes into this movie expecting an airtight (or even coherent) story is there for the wrong reasons—that’s pretty much a given. On the other hand, I’ve never subscribed to the “just turn your brain off” mentality either. And, even if I could resolve that ambivalence, both of those concessions fall flat when well over half of the movie centers around half-baked human drama. KOTM sells itself on Big Action, but it felt like every time there was a throwdown the camera cut away to a character miraculously navigating city-wide destruction or others bickering in some lame, tangential side-story. The most egregious example of this is when Ghidorah, who is so incomprehensibly massive here that he generates a Category 6 hurricane when he flies (they only go to 5), heads for D.C. We only get to see about 30 seconds of something I think everyone would really want to see before Kyle Chandler diverts an aircraft to Boston to look for Millie Bobby Brown. I’m not especially prone to Nerd Rage, but come on!

Thankfully, what we do get of the Kaiju truly is remarkable, and the fights are pretty awesome—even if a great deal of them occur in dark, stormy conditions done over in that obnoxious orange/blue contrast. What is most impressive to me, though, are the creature designs themselves (as much as I love the rubber suits, it’s pretty amazing what computers can do these days). There is tremendous attention to detail which imbues the Kaiju with so much personality that they become more than mere monsters—they become characters. Mothra, especially, is awe-inspiring. And, like Gareth Edwards’ preceding film, the sound design and editing is once again phenomenal as well, particularly in how well it ties into creature design. For example, Ghidorah’s presence is underscored by hissing and slithering sounds, with a rattling entering the mix as his tail passes into frame, evoking a primal, serpentine aspect, making him that much more menacing. Even for how pants-on-head stupid much of this movie is, it was clearly made with a lot of love, and it shines through in every roar, stomp, and atomic blast.

This will probably garner some eye-rolls, but sometimes it’s hard to be a fan. Several weeks ago, engaged in a, let’s say, healthy Facebook discussion of the latest Star Wars trailer, a friend of mine said to another, a purist, “it’s no longer for you.” It was a playful jibe, even if it was a dismissal of the “get off my lawn” types who drag fandom into toxicity. But, either way, it ended the conversation. I’ve never particularly cared for Star Wars, but I knew how he must have felt—I’ve grappled with the same feelings regarding the MCU for the better part of the last decade: the realization that the comics I held so dear so for long no longer have much bearing on the films. There’s a sense of ownership that comes with being a fan, and, with ownership, a sense of pride. The things you like, you begin to identify with. They become a part of who you are. And for those things—those parts of you—to change, suddenly, and seemingly right from under your feet, well, it kinda sucks. It also sucks when you want to like something more than you really do.

I had that same feeling seeing POKÉMON DETECTIVE PIKACHU: this 31-year-old, seated alone amongst a bunch of kids who would probably blink dully at the weight of a Game Boy, confronted with the awful reality of not recognizing half the Pokémon on the screen. The wistful siren song of nostalgia is lovely, but in listening one may wind up stranded on the rocks of resentment. But it’s true. A lot of these big franchises just aren’t making movies or games for the old guard anymore. And, really, they shouldn’t have to. There’s a whole new generation that wants—and is due—its own stories, its own mythology.

The original 1954 film, GOJIRA, is a deadly serious reflection on the very scary, very real, threat of nuclear technology—a story only the Japanese could tell. I’m not Japanese, and it doesn’t matter how many anime and Kaiju films were beamed into my squishy young brain, I will never have that same connection. Godzilla, in the strictest sense, never was for me—he only began to mutate into the rubber-suited goof we know and love after the original was re-edited (conveniently omitting the sociopolitical, anti-nuclear, and decidedly-Japanese themes) into the American, Raymund Burr-vehicle GODZILLA, KING OF THE MONSTERS! in 1956. But, even so, over the course of 65 years and 35 films, he has gone through as many iterations as, well, one might expect an irradiated lizard to. Times change, stories are passed on. That’s how I was first exposed to Big G all those years ago. That’s how he is the star of a major blockbuster today.

I’m starting to wade out into the gulf of nostalgia here, but what I’m trying to say is that, whether the film is good or bad, Dougherty cares about Godzilla and his fans—old and new. Where DETECTIVE PIKACHU may have made old-timers feel out of the loop and THE LAST JEDI intentionally cast them aside, GODZILLA: KING OF THE MONSTERS does a pretty good job of honoring the past while looking towards the future—what future that is, now, remains to be seen. I’d be lying if I said the film’s magic isn’t nearly undone by its numerous issues, but if your heart doesn’t soar along with Bear McCreary’s rendition of Akira Ifukube’s timeless score as Godzilla stares down his ancient foe, then this movie most likely just isn’t for you.

On THE BEST OF LUCK CLUB, Alex Lahey Grows as Both a Person and Musician