Step into the magic for only $6.99/mo! The pixie dust has fallen, dear readers, and Disney+ is nigh. Is it worth it? Pretty much, yeah! Have we already forgotten about Apple TV+? Absolutely. Enjoy our thoughts on the latest scrimmage in the ongoing Streaming War! 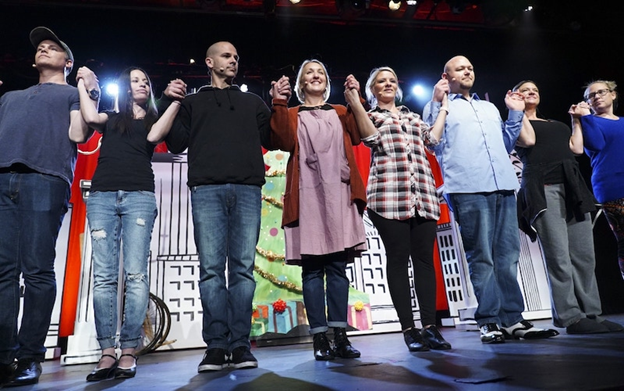 It’s a truly Herculean task to make me want to relive my high school days—perhaps even more Herculean than throwing together a full production of a musical in less than a week. As much as I’ve been excited for the gargantuan library available on Disney+, out of all the original series announced, this is the one I’ve really been counting down the seconds to. I’m a true blue high school theater nerd, and I’m happy to report that ENCORE! is completely my shit.

A barely-present Kristen Bell reunites the adult cast of high school musical productions to put on one last big show. They work with world class Broadway directors, music directors, and dance captains to pull the production together in five days, reprising their teenage roles in classic musicals like ANNIE, BEAUTY AND THE BEAST, and THE SOUND OF MUSIC. All the usual awkwardness ensues as high school classmates reunite after over a decade, and on top of it, they’ve got a show to put on.

I can point to a few reasons why this setup works extremely well. First, high schools are notorious for doing the same 15-odd musicals over and over again, so if you were in theater in high school, chances are you’ve been in at least one of the shows featured on ENCORE! Second, this show is geared very deliberately toward adults. The pilot episode shows a mom drinking red wine in her walk-in closet to hide from her kids. The teacher who reprises her role as Miss Hannigan in “Annie” describes how the character had great dreams for herself but got stuck taking care of a bunch of “little girls”—intercut with B-roll of her trying to wrangle her kindergarten class. The players reflect on who they were in high school, what they went through, and how they’ve changed. I’m sure current teens and kids can relate to this in an “it gets better” kind of way, but it resonates really powerfully with adults. And third, this does not read in the slightest as a low-bar opportunity for Disney to plug their broadway musicals (looking at you, DISNEY FAIRYTALE WEDDINGS). The focus is squarely on the performers. You wouldn’t even know it was a Disney show if it wasn’t on Disney+.

I’m gonna be honest—I devoured the first two episodes and then immediately combed through the trailer to try and suss out what the other musicals are in anticipation of the weekly releases. I really, really love this. “The Sound of Music” is up next on Sunday, and I’ve invited my high school friend I was in the show with over to watch it. If you were a theater kid, or even a theater adjacent kid, I’d definitely recommend checking this out. [Kate Brogden] 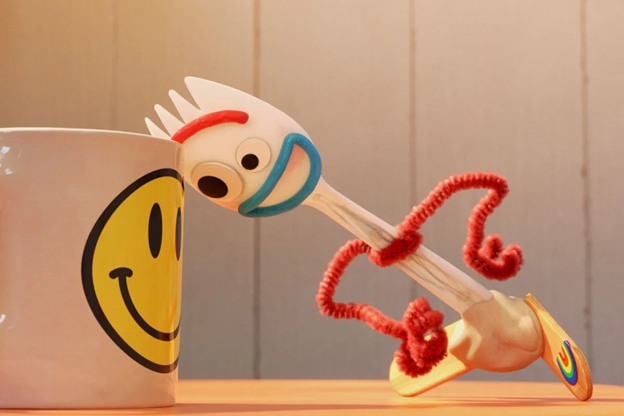 When you write about TV, you sometimes stumble across something truly unique. Something so genuinely its own that attempting to type words of its description feels like a Sisyphean task. FORKY ASKS A QUESTION is one of those times. You may wonder why FORKY ASKS A QUESTION: WHAT IS MONEY?, a two-and-a-half minute video in which an exasperated piggy bank attempts to convey kindergarten-level facts about US currency to a spork, has caused such consternation in my soul. I don’t quite know the answer myself. I only know that I was disgusted, concerned, confused, and positively delighted all at once.

Forky (Tony Hale) spends the first 10 seconds on exposition regarding his origins: “I was made from trash, like, two days ago.” He, like all of us, is deeply curious about the universe around him. His quest for greater knowledge begins in the depressing but practical realm of finance. He invokes the advice of Hamm (John Ratzenberger), a piggy bank that presumably has gained economic wisdom by having various bank notes crammed into the back of his torso.

To the character’s credit, Hamm sticks to whimsical trivia rather than economic class structure analysis, which is not a subject I trust Disney to teach. Hamm begins his lesson with a simple definition: “Money is an accepted means by which one may purchase goods and services.” So far, so good. Nothing that creates an urge to burn down Wells Fargo. He continues with a description of different forms that money can take, as well as a lovely Snapple fact about the three cities in which money is minted.

The true star of the show, of course, has to be Forky. Within Forky, there are two wolves. One wants to take knowledge from the world. One wants to fill the world with whimsy. Fortunately the wolves are friends and often snuggle each other while they sleep. His good-natured antics and mischievous distracting comments elevate FORKY ASKS A QUESTION to the level of those shorts shown before Pixar films. If you’re off-put by the capitalist subject matter, you just might be won over by Forky’s adorable googly eyeballs. [Dan Blomquist] 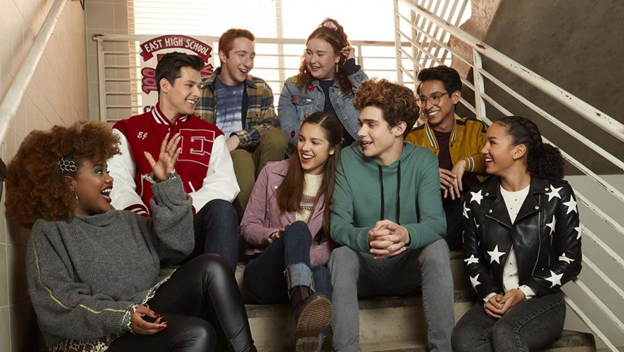 It’s all very meta, which would have drawn me in anyway, but on top of that, it offers my favorite thing in the world. That’s right. COMMUNITY THEATER DRAMA. Oh yes, I live for the D-R-A-M-A, and this show has it all. A love triangle! A bitchy newcomer! Parents who are (maybe) getting divorced! It’s like RIVERDALE except with more humor and less weird sub-plots about cults! (Well, it is Disney, after all.) The only problem? It’s not actually a musical, which is a major disappointment in my eyes. Still, it’s only been one episode—they’ve got plenty of time to slap some new songs in there. In the meantime, the drama plus meta humor is enough to make me come back when the next episode airs. [Anna Mansager] 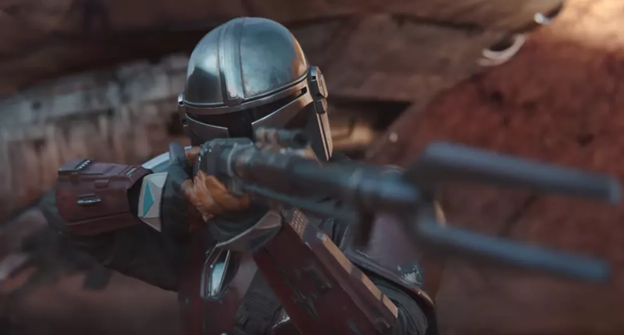 On the far reaches of the galaxy, deals are made, credits change hands, people are captured and killed. In a post-Empire universe, law is less written than implied, with blasters and the raw forces of nature determining the true victors of “justice.” Life is bought and stolen by Men With No Names masquerading as knights errant. The talented and skilled survive and make a fortune before the next architects of a new empire roll through with their uniforms and spaceships and esoteric religions.

One would think, given the narrative potential of The Star Wars Universe™, that spin-offs, side stories, and the like would be hugely successful without even trying. It’s a rich world with bizarre lore that can be picked up and used or completely ignored and such an awesome, classic, filmic style. However simple the plot, live-action Star Wars properties feel like films because they pay respect to the importance of spectacle and the figurative potential of shot composition. It’s unfortunate, then, that the Disney+ original THE MANDALORIAN ignores almost all of that.

Set after the end of THE RETURN OF THE JEDI, and in some even further galaxy far far away, THE MANDALORIAN follows the exploits of an unnamed Mandalorian working for the bounty hunting guild, taking bounties and surviving in that lone wolf type of way that often gets mistaken for invoking “westerns.” He’s a cipher, the mask never comes off, and while he interacts with some colorful characters (space Nazi Werner Herzog hiding out in a pseudo-space Brazil, space Nick Nolte as stoic mechanic/rancher/whatever the episode needs him to be), he remains flat and affectless even when gifted with the requisite clever quips that often get attached to lone men with guns in the Star Wars universe.

The problem with THE MANDALORIAN is that it signals “Star Wars” without imbuing anything with any meaning (or character). The vistas are beautiful, the creatures look interesting and distinct, the action is competent, but it all just happens without any reason other than to remind you that it’s “STAR WARS,” and without even bothering to make you care or at least be interested in Pedro Pascal’s Mandalorian. The end of the pilot episode is interesting and the second episode fares better, but THE MANDALORIAN feels diluted—at least so far. Everyone will end up watching it anyway because of Disney’s media monopoly, but it would be nice if our gruel was at least more fun (and took us more seriously) if it’s the only thing we’re going to eat. [Ian Campbell] 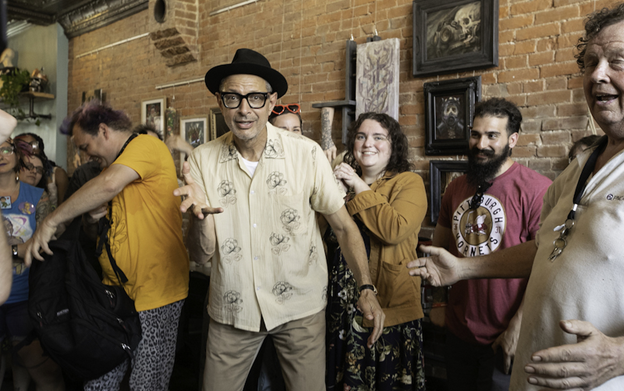 THE WORLD ACCORDING TO JEFF GOLDBLUM (Disney+)

THE WORLD ACCORDING TO JEFF GOLDBLUM isn’t to be overthought. Like most celebrity travel and reality shows, if you like the celebrity at the center you’ll probably like the show, and unfortunate Woody Allen takes aside, I do like Jeff Goldblum. The man truly is in a constant state of wonderment—look no further than the conversations he has with grocery store employees in Funny or Die’s clever sponsored content COOKING WITH JEFF. Placing him in fish-out-of-water scenarios and seeing him legitimately learn things through his delightfully blasé and slightly suave filter is fun.

The first two episodes find Goldblum at both ends of the documentary spectrum: in the pilot learning about the world of sneakers and in episode two learning about ice cream, the former decidedly more interesting while the latter playing it semi-safe. Who amongst us doesn’t occasionally enjoy ice cream? The editing and visuals of the show are ripped straight from Complex’s YouTube channel, featuring the kind of pithy and snappy editing that First We Feast’s THE BURGER SHOW (and others of that ilk) streamlined to differentiate themselves from conventional cable documentary TV years ago. And while of course this feels like a multi-million dollar production, with Goldblum globetrotting in ways that the average online production could never, it has a youthful vibe that matches the effervescence of Goldblum—who is 67. He really does want to learn about things, and so to see him explore the world of sneaker culture from every single angle, from the buying and selling, to convention culture, to unboxing, and even making the shoes, is satisfying throughout, even if this still feels like background filler more than one of the major releases for Disney’s premiere streaming platform. We’re probably on the brink of having to cancel Goldblum (even here there’s a moment where he hugs someone for just way too long—touching is unfortunately the man’s love language, innocent or otherwise, and I say this having met him), but THE WORLD ACCORDING TO JEFF GOLDBUM is wholesome, passive fun. [CJ Simonson]