Welcome back to the magical world of Peak TV where anything is possible! Well, that is, if it doesn’t get prematurely cancelled due to lack of viewership. Still, this most recent batch of shows has the most unique offerings we’ve seen in a while. How many of them will last? Who knows! Check out our thoughts on all of them below in this week’s TV roundup! 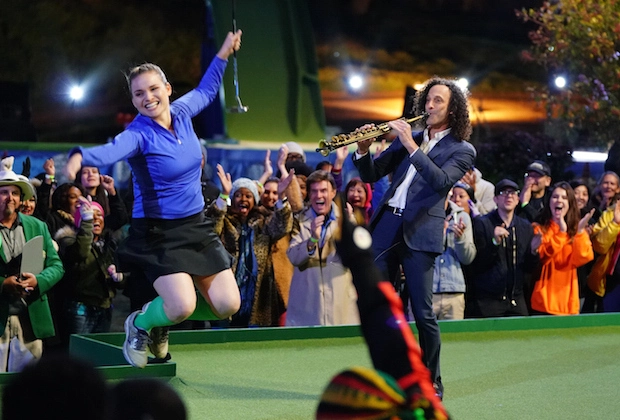 Reality TV is quite the dystopian crapshoot these days: the cut-to-the-chase sexual bombast of LOVE ISLAND, the pants-shitting “what am I seeing”-ness of RELEASE THE HOUNDS, the transparent emotional manipulation of MENTAL SAMURAI… It’s high time for an equally straightforward, bonkers, and wholesome primetime reality TV show, and HOLEY MOLEY is a slam dunk. Or… hole in one. I don’t know. I’m not a sport.

The elevator pitch for HOLEY MOLEY is “WIPEOUT meets mini-golf.” Contestants battle their way through the ultimate mini-golf course by way of Japanese game shows in a bid to win $25,000. However, this show is greater than the sum of its parts. There’s no MENTAL SAMURAI-esque emotional gymnastics where the producers try to force us to care about the game because some contestant’s mother is in hospice care and it is her dying wish to see her baby boy sink a hole in one after navigating a greased-up obstacle course. Nope—our first contestant out the gate is a bro-dude in a unicorn onesie who, when asked why he’s here, says simply that he’s just really good at mini-golf.

This charming tongue-in-cheek sincerity permeates the show, from the “why the fuck are we here” chemistry between announcers Rob Riggle and Joe Tessitore to the transparently shoehorned Stephen Curry segments. The challenges are fun, there’s some real skill on display, and everyone operates under the understanding that this is goddamned mini-golf and we’re here to have fun.

If you’re alive and not a total killjoy (which is a big ask from our readership, I know), give this one a shot. It’s the best kind of big dumb fun, and if you’ve ever drunkenly stumbled through a mini-golf course at a Boomers with your friends, you’ll feel right at home. [Kate Brogden] 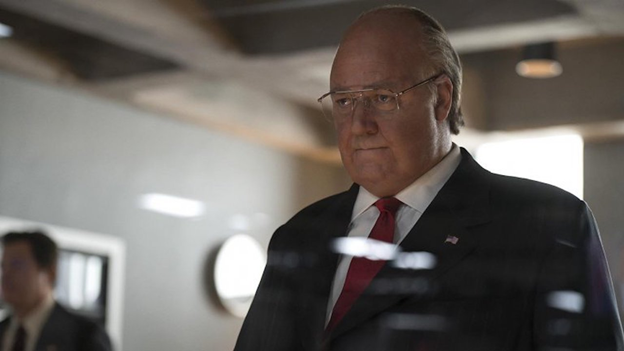 Fuck this guy, right? No matter how THE LOUDEST VOICE was to go about presenting the story of Roger Ailes, CEO and mastermind behind Fox News, the only logical conclusion one could come to is still just fuck this guy.

Our first shot of Roger is him lying dead in his apartment, the first of many signals that this is meant to be hate-watched by liberals who want to get to know the other side to demonstrate how open-minded they are. That lofty ideal of a show that captures the scope of his sins while giving him his dues as a guy who “gets it done” or whatever never materializes. We’re left with a Pain Olympics of slo-mo groping, faux-witty verbal abuse, and meat slurry mastication. Lacking the humor and anger of peers like VICE, THE LOUDEST VOICE is another bland entry into the already overcrowded “vaguely mean biopic about conservative shithead” genre. [Dan Blomquist] 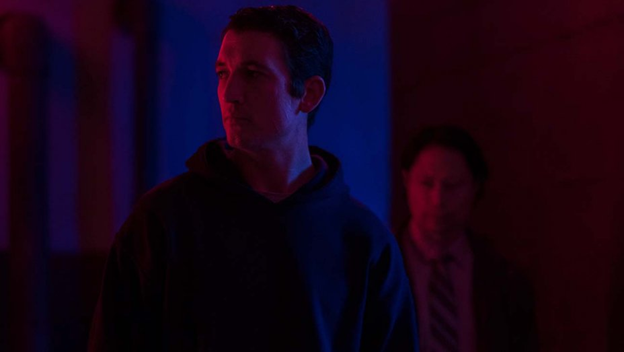 If you’re among the viewers who remained skeptical of TWIN PEAKS: THE RETURN’s significance to the medium of prestige television at large, then look no further than Nicolas Winding Refn’s latest venture: the moody, gloomy, doomy Amazon series, TOO OLD TO DIE YOUNG. Exactly one year after David Lynch premiered his third season (some might call it a film, but that’s a whole can of worms we don’t need to open) at the Cannes film festival, Refn did exactly the same; only he wasn’t greeted with a standing ovation.

In many ways TOO OLD TO DIE YOUNG is a dire attempt to emulate the slow-burn, long-format television quirks of Lynch’s acclaimed series. Sure, it’s set in a contemporary neo-noir Los Angeles, and doesn’t exactly look or feel anything like Twin Peaks, but many of the intentions are the same: plot threads that go nowhere, auxiliary characters treated as essential to the narrative, and scenes that overstay their welcome by four, five, even 10 minutes. Much like Twin Peaks, it often feels like Refn is self-sabotaging his own show for the sake of being alienating, but Lynch does so with humor, where Refn does it with a certain uncanny narcissism.

So yes, TOO OLD TO DIE YOUNG is an exhausting watch, and one that’s hard to recommend to anyone that isn’t a Refn diehard. Ultimately, even the occasional gorgeous photography and killer synth score don’t do much to save a rather haphazard show. It really does feel like Refn stretched the budget for a feature film to accommodate a 13-hour series here. But worst of all, it’s just way too light on humor, an almost inexcusable sin for such a slow, patience-testing series. With all that said, in many ways this is Refn’s most interesting work since DRIVE; it’s “auteur” television of the tallest order, but it’s also exhausting and not exactly fun. Your mileage with this will vary greatly depending on your commitment to the man behind the camera, but for what it’s worth, it’s cool to see Amazon supporting shows that are this impenetrable. [Sergio Zaciu] 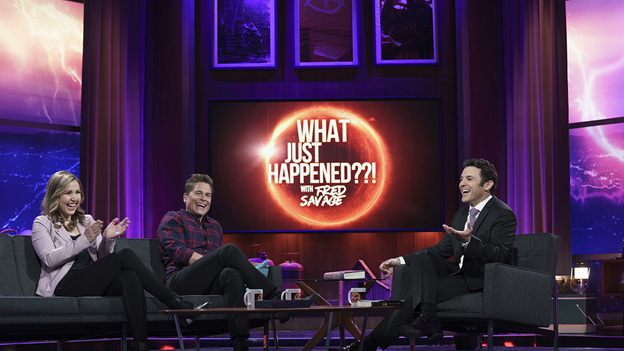 I’ve gotta admit: I’ve been hyped for this since it was announced in April. I initially had no idea how Fred Savage’s WHAT JUST HAPPENED??! would take shape; the pitch was, “a real aftershow about a prestige fantasy series that doesn’t exist.” Taking the piss out of peak TV standards like GAME OF THRONES and THE WALKING DEAD, Savage plays a heightened version of himself and huge fan of THE FLARE (aforementioned show that does not exist) based on his favorite series of books as a child, “The Moon Is The Sun At Night” (also not real). What is real are the celebrity guests, and a sneaky meta-textual narrative where Savage becomes more and more unhinged as no one appreciates his fervor for the show quite as much as he expects.

WHAT JUST HAPPENED??! is essentially a tamer, network version of THE ERIC ANDRE SHOW with the subtle underlying narrative elements of REVIEW or NATHAN FOR YOU. I’m certain nothing on WHAT JUST HAPPENED??! will come close to the anarchic energy of Eric Andre terrorizing his guests with live rats and pictures of Obama’s dick, but the fact that anything on FOX’s Sunday night line-up cites it so clearly as an influence is incredibly fun. Part of the humor behind ERIC ANDRE is the fact that it could never be mistaken for a real talk show – WJH??! bucks this entirely and could very easily be mistaken for a real aftershow, down to the last few minutes of THE FLARE that airs at the beginning of every episode. It blurs the lines between reality and fiction in an alarmingly seamless way, to the point that I wasn’t even sure if the ads I was watching were real.

This is a huge swing for FOX—it is probably the weirdest thing on network TV right now. It’s so postmodern and bizarre I hope they don’t fuck it up somehow, because I want more of it. Give it a watch! If they manage to not get cancelled halfway through their first season, this could turn into something really cool. [Kate Brogden] 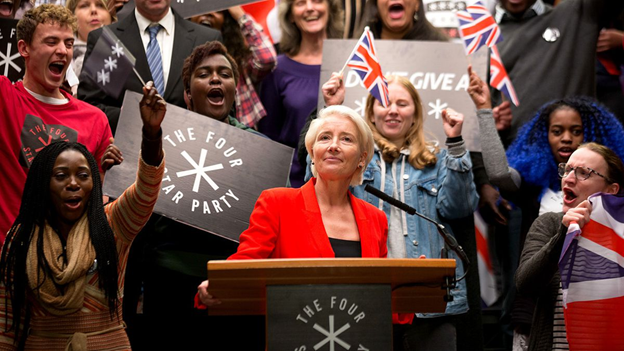 Russell T. Davies astral projected into the future, and turned what he saw into BBC/HBOs latest bone-chilling drama, YEARS AND YEARS. I would call this show a dystopia, but honestly… it’s too accurate of a prediction to think it won’t be real in the coming years. Trump re-elected, $12 coffees, refugee crises, the banks failing. Oh, and nuclear war with China. Sounds lovely, right?

YEARS AND YEARS follows the Lyon family, as each unit of the larger whole weathers a brewing global shitstorm. With the birth of the youngest Lyon, Lincoln, the show’s pseudo-protagonist Daniel wonders aloud about the child’s future. “If the world’s this bad now, think about what it will be like in 15 years. 10 years. 5 years,” Daniel pontificates, as British media sensationalizes Vivian Rook, a trash-talking, fear-mongering, female Trump.

Davies loads his episodes with his own curmudgeonly insights, sounding off on all manner of political and social topics. Everything from fake news, the rise of technology, and neo-sexuality—often laced with a world-weary snark that, I would imagine, comes from personal experience. Which is why there’s a rawness and truth to Davies’ stories. They feel genuine because he writes from his heart and mind, and doesn’t filter. You know exactly what he thinks and why, and it’s genius.

YEARS AND YEARS is like BLACK MIRROR and HANDMAID’S TALE. Dystopian, a commentary on our self-inflicted, human tailspin. It’s made me think, and it’s made me angry. At this point, maybe that’s the only thing that will reverse this slide into chaos. Davies has tapped into something here, and I am chilled, thrilled, and waiting to see “what happens now?” [Tracy Nicoletti]

A Complex System That Doesn’t Take Itself Too Seriously: Joe Jacobson, insightEXCITE, and Studio JŌJ